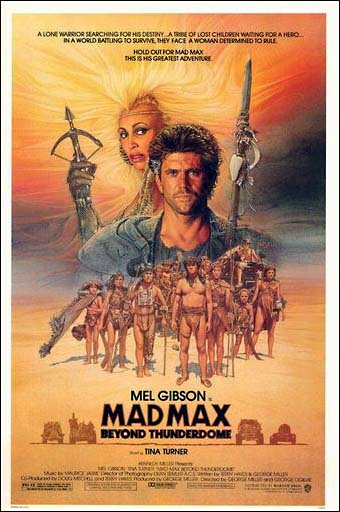 If you missed Part 1 or Part 2 of this series, you might want to go back and read them.

Mad Max 1 showed a world where people and society were breaking down. The people are living, but the fabric of society was ripping. The line between morals and values was blurring. And the value of life was seen as lost. You saw no bombs, but things looked bleak.

The Road Warrior made it clear that society was lost. What happens when government is no longer there for people’s protection? We see people scraping by for an existence. Joining together when they can, but relying on the good graces of others. And these ties prove to be not so binding.

The third installment, Mad Max Beyond Thunderdome, takes us a few years down the road from when The Road Warrior takes place. You know this first due to the fact that Max’s hair is longer – very 80’s esque. And also, the desolate desert has moved on. Gone are the recent trappings of the past world.

There is little or no traffic in the way of cars. Lots of getting around on foot or with pack animals.

And as with the first two movies, this one is packed with important takeaways that speak to protecting ourselves now.

Up Another Notch – Better soundtrack

Unlike the previous movies, the Mad Max franchise decided to upgrade with more acting firepower. Well, maybe one names actor – Tina Turner – who is more a singer. But a big name nonetheless. And the bonus was that they get Tina Turner singing the opening song. I often wondered which was the bigger draw for Tina – the chance to act or a vehicle to put out a hit song. Both seemed to work. Here is the song – We Don’t Need Another Hero:

Now you might not see the value of a good soundtrack, but that is my own litmus test. I love music. It speaks in ways that the actors, the script and the setting cannot. It set the mood. And in this case, it lived beyond the movie and helped to bring in new viewers (who were probably confused as hell trying to understand what was going on.

Additionally, the costumes showed a world without the trappings of mass production. In Road Warrior, people were wearing the clothing they got away with in the aftermath whatever apocalypse happened. In Thunderdome, people are wearing much more rag tag clothing. Its either Rags or feathers or leather or whatever people could stitch together. It is truly devolved society.

The One “bright light” in the desert becomes the shanty town city of “Bartertown” Max is led to it after his wagon (sorry no cool cars in future apocalypse world) and camels are hijacked by a flying vehicle (desert life still sucks as much as during the Road Warrior). Max follows it into the distance to Bartertown to try and retrieve his things from the thief.

Bartertown is the conflux of devolved society. People are allowed to come in if they have something to trade (and will pay for the opportunity). It shows the state of society in the apocalypse – no money, all trade by barter. It’s a come together swap meet. Max has to finesse his way in, as he has nothing to trade anymore. He offers his “skills.” He finds himself in one of those “Offers you cannot refuse.” Auntie (the punked out version of Tina Turner). And she conscripts Max to face Thunderdome – a apocalypse-day version of a Gladiator Fight. 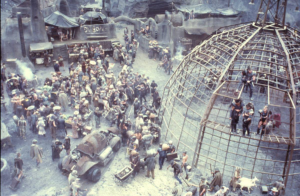 “The Law” of the new land is one of power. Power is controlled by dictatorship by Auntie, who uses her own form of Democracy/ Mobocracy to control Public Opinion. They come together at Thunderdome – like a WWE cage-match. But its a fight to the death. The law of Thunderdome:  “Two Men enter, one man leaves.” The offer/deal Max cannot refuse is to kill his opponent. When he realizes that the brute he is charged with killing is mentally challenged, he will not, thus breaking the deal. Which brings up the next law,  “Bust a deal, face the wheel.” 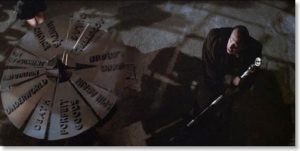 Here brings in a new form of justice, where you are pretty sure this cannot be good. You see a “wheel” that is spun, like on wheel of fortune. And reading through the possibilities, there is a small chance of “aquittal.’ Though the rest speak of potential horror. Amuptation. Death. Forfeit Goods. Underworld. Aunties Choice. As Max spins the wheel, his winner is Gulag. Now what could that possibly mean.

Fast forward to Max sitting backwards on an old horse tied up. In front of the horse’s nose dangles a jug full of water. And they place a large Mask on Max’s head and slap the horse to go running into the desert – where it gets lost, keels over and dies – with Max still strapped to it with this goofy mask on.

So what does this mean to our world today? DEMOCRACY – Consider the number of times in the past 2 years our governmental system has been called a “democracy.” And people say this with a straight face, thinking “democracy” is a good thing. Their lack of understanding about it astounds me. Under a true democracy, the Mob rules. If it comes to an up or down vote, protections on your liberties are basically gone. Think of one of the most well known Mobocracy trials – that of Jesus Christ. Pontius Pilate asked the crowd who they would like him to save. And it was not Jesus, but an actual criminal, Barabas. The founders of the USA considered democracy, and chose instead to make us a republic. This gives the chance for discernment before a wild and crazy, emotional decision is made.

DICTATORSHIP – in the absence of laws, people with power (money, goods) and Charisma will rule. And it is in their best interest to rule with an iron fist. Then the rules become whatever that person may decide.

SURVIVAL – Or survival of the fittest. Consider whether you are able to defend yourself now. Are you physically fit? Are you emotionally prepared for adversity?

And what about the Children?

Now we come to the points that were actually the main reason I began thinking about Mad Max in the first place. Max is then rescued from the desert and brought to an oasis in the desert. And here are a group of Children ranging from very young to teenagers. They have been left here post-apocalypse to survive. And as a result, they have become their own cargo cult. Being young, they have just enough where-with-all to survive and feed the little ones. After that, what have they become?

After capturing Max, they introduce them to their Now. Together, they tell the story of their life, which they tell from memory around the nightly campfire. They call it “Telling the Tell.”

“We got it mouth to mouth, so you gotta listen it. Remember. Cause what you hears today you gotta tell the birthed tomorrow.”

The oldest among them act out the story – with modern props to tell the story. About Captain Walker – the pilot who brought them to safety to this place. With the use of a viewmaster camera they tell a a basic story about how they got there and what they know about their history. 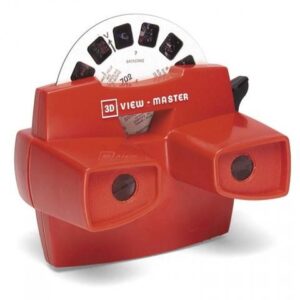 It is in this story, that the true tragedy of apocalypse can be seen. What happens to the history of society. The oldest and the wisest are only as knowledgeable as who they learned from – and how much they remembered. Can they read? It is all fractured history. They take Max as the Hero of their world. He, to them, is Captain Walker, returned from myth. To them, he is the savior. To Max, they are just an encumbrance.

In the end, he steps up and is able to rescue at least come of the children. They fly out of the desert to a city, where they find themselves alone with buildings and more of the trappings of the past. Still spreading their version of the past – telling the tell.

I remember this when I am teaching my own children. Which things do they need to know first? Is it self defense? Is it survival? Is it history? The importance of freedom?

At least for now, much will be about gardening – call it survival.