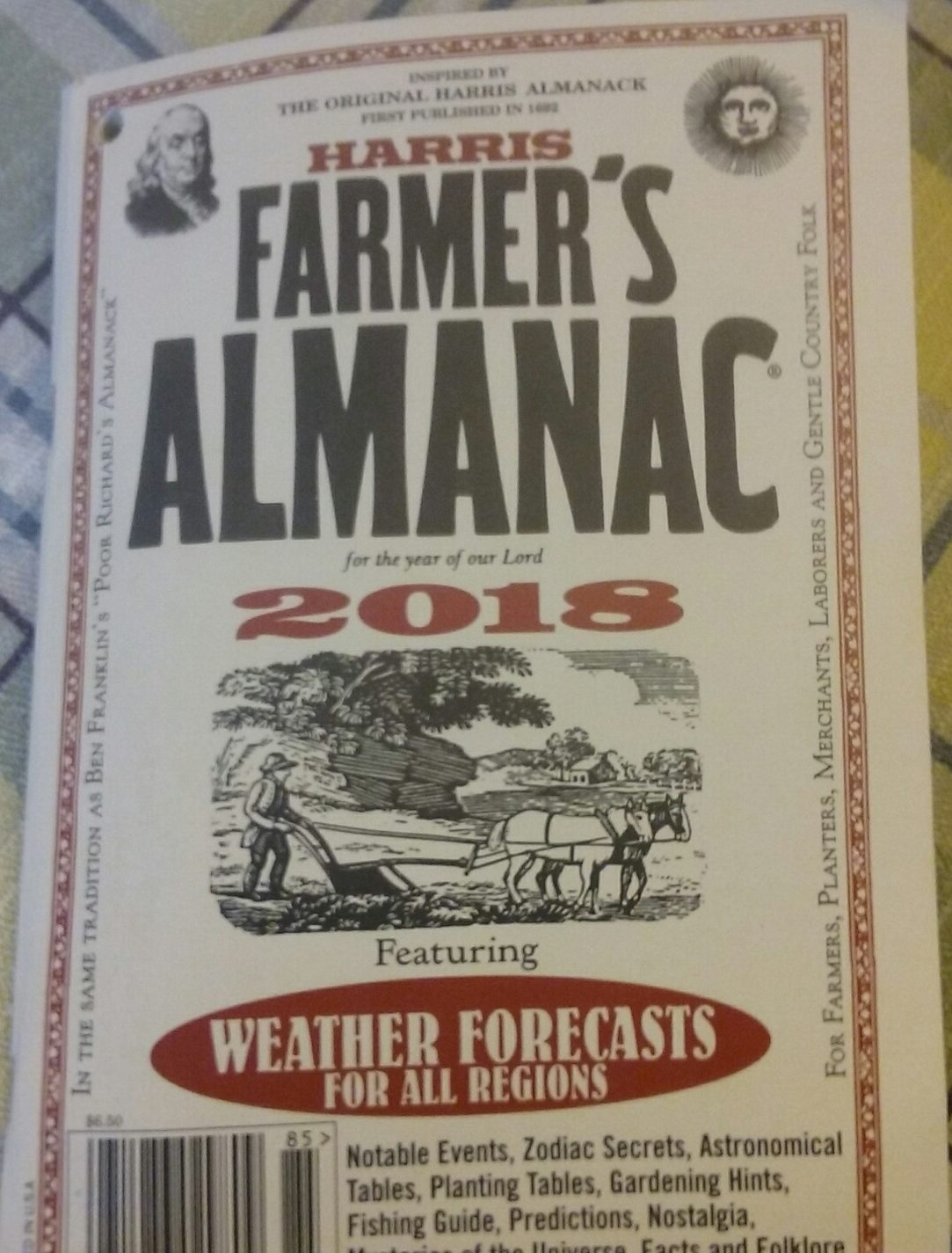 Do you read the Farmer’s Almanac?

If you don’t do you know anything about it?

Starting at the beginning of my 2018 Harris Farmer’s Almanac, the first line to its readers:

And in reading the Almanac, you find this to ring true. On the one hand, annual almanac is like the Reader’s Digest – with short articles about the weather, gardening, recipes and the like. Who doesn’t want to know about weather patterns in southern Iowa or bugs in South Carolina or how to make bread without a bread machine. Some are articles about wisdom from bygone days. Others are just trivia. Intelligent conversation starters that can be brought up while waiting in line somewhere.

But the articles are just window dressing. The real nitty gritty of an Almanac is the calendar. Especially before the Internet, sources were needed for people to be able to track cycles and events throughout the year. You have your calendar on the wall. The Almanac told you about what happens each day.

Is there a Holiday or special observance?

What is the phase of the moon?

How long is each day? Sunset? Sunrise?

What kind of weather are we expecting this month? (Can’t be any less accurate than the evening news here)

In American Culture, the most well-known Almanac was Poor Richard’s Almanac – published, written and sold by Benjamin Franklin. It is known as the place where he offered pithy, meaningful quotes. I will share them from time to time on this blog, as they often have great advice, and are funny as well. The quote for today:

Reminds me that I have not written enough for this blog and need to get to it.

Transforming our Yard into a Garden 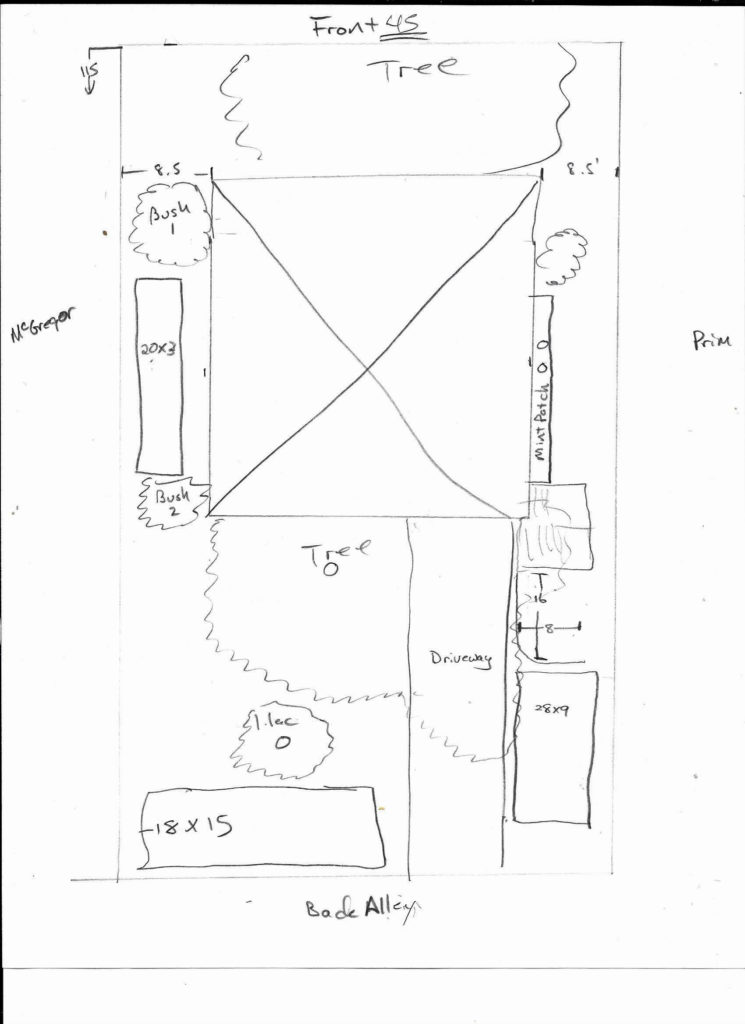 Since we moved into this house 20 years ago, we have had gardens. In fact, the gardens around the yard were something that we marveled at from the beginning.

We chose this house and moved in in the winter time – February and March. We could see lawns, borders, trees and bushes. But that was about it. The real makeup of our yard only revealed itself in the coming of the spring – around about April here in Eastern Pennsylvania.

What we found was a wealth of annual plant life and some wonderfully designed gardens on the back and side yards. There was a White Hydrangea, two beautiful Peony bushes, gardens bordered with Hosta and a couple Azaleas.

Other than a few rose bushes along the side, and a Lilac bush in the center of the back lawn, we have left the planters pretty much alone. We have planted flowers and groomed the bushes.

The other unfortunate aspect of the property is the large trees. We live on a tree lined street with a beautiful canopy of Lindon trees. The affect in the summer is that our street feels like a tunnel. It keeps the street 10-15 degrees cooler, which is also a plus. However, Lindon’s are messy. They drop stuff throughout the year. And the shade, while beautiful, blocks out the sun in front to the point where not even grass will grow effectively. And other than bushes, the only flowers we can plant are impatiens.

The back yard has another feature that limits what we are able to do. Right behind the house is a huge Mulberry Tree. During the month of June, the yard is a mess with rotting mulberries and bird and squirrel droppings.

From the first year, I began planting a small patch in the back lawn – the SouthEast Corner. We have planted what most backyard gardens have – tomatos, beans, cucumbers, zucchinis, peppers and the like. Sometimes we will add something different, but usually it has been just run of the mill.

As the point of this blog, I am expanding the gardens to grow food and herbs in the available space on our property. It came as an inspiration last year when I really wanted to be planting a bunch of herbs but did not have the time to do it since it was late in summer.

So, this winter, I began to plan out how to gain more space. In the hand drawn diagram above, you can see where I plan to plant. Much of this will require a lot of work, including turning soil, removing bushes and repurposing existing garden spaces. This blog will show it all – and offer as much advice as I can learn along the way.

In future posts, I will explain some of my thoughts and scratched from my sketch. 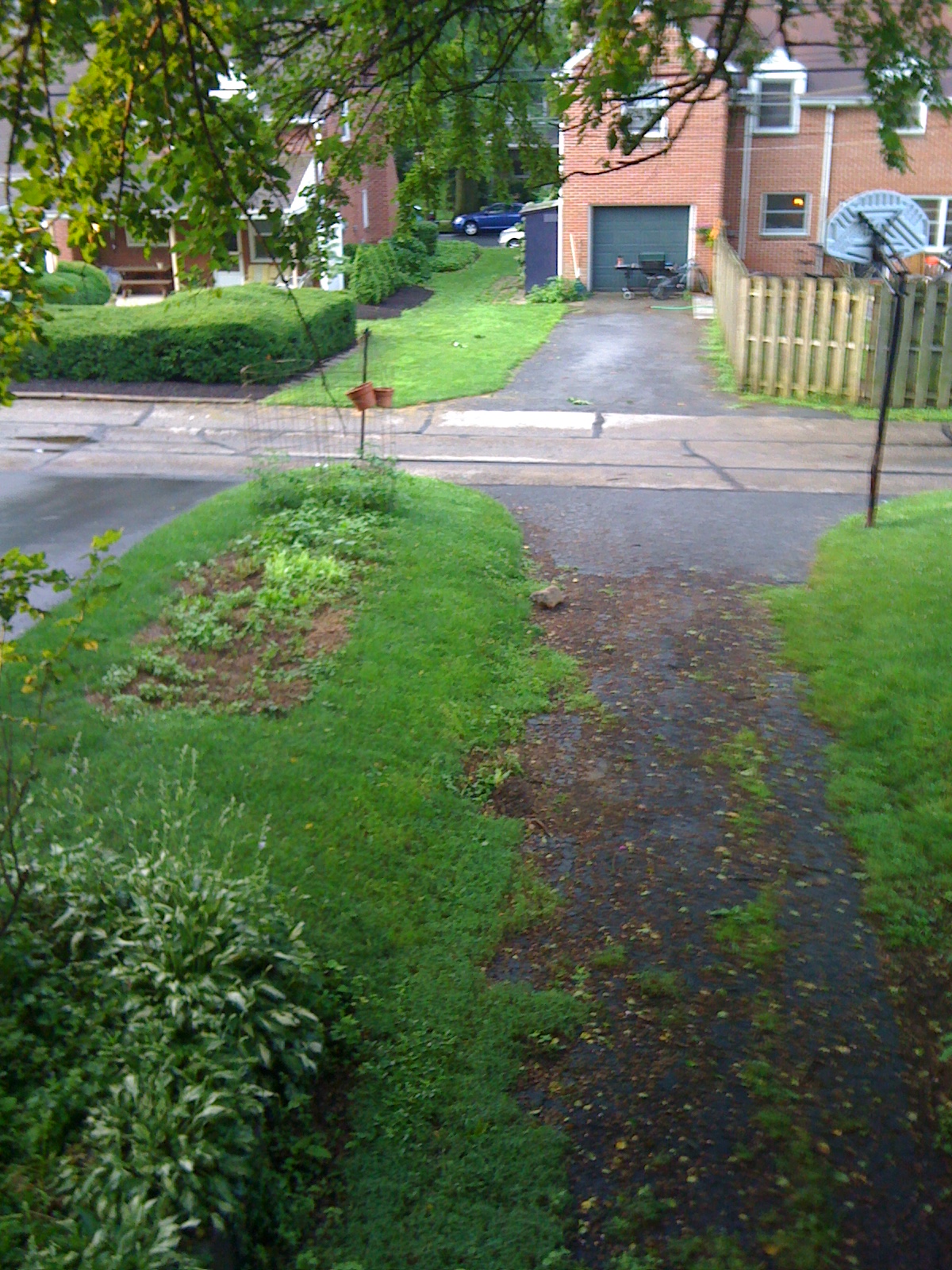 Talk about planning ahead. I have been incredibly lax in my gardening of late (hell it’s been a couple years since I have done anything worthwhile). And this is with the flowerbeds as well as the vegetable patch. Whether it has been due to time or money, there has been little I have done outside.

That is not to say I haven’t had grand plans and dreams about it either. I always think that this will be the year I get tomatoes in by April or feed my plants regularly or have funds to buy the basics when they are needed. So many excuses. I can’t plant or mow in the rain. I am busy running around this week. I hate trimming those damn bushes and I do not have yard waste bags. It could be any excuse.

So, I have decided that this year I will plan out a garden and get serious about planting the things I want. And what better way to make myself do it than to share it online. There was a movie a few years back called Julie and Julia that told the story of a girl who did something similar with Julia Child’s Cookbook. She decided that she would go through the cookbook and make a recipe each day – and then blog about the experience. Well this will be a Garden Blog of the same sort.

And how will this work? I will be writing each day about my plans and about the progress I am making. There will be pictures of everything and open for commentary from anyone interested in taking part.

So for now, Keep reading and thank you for being a part of this. 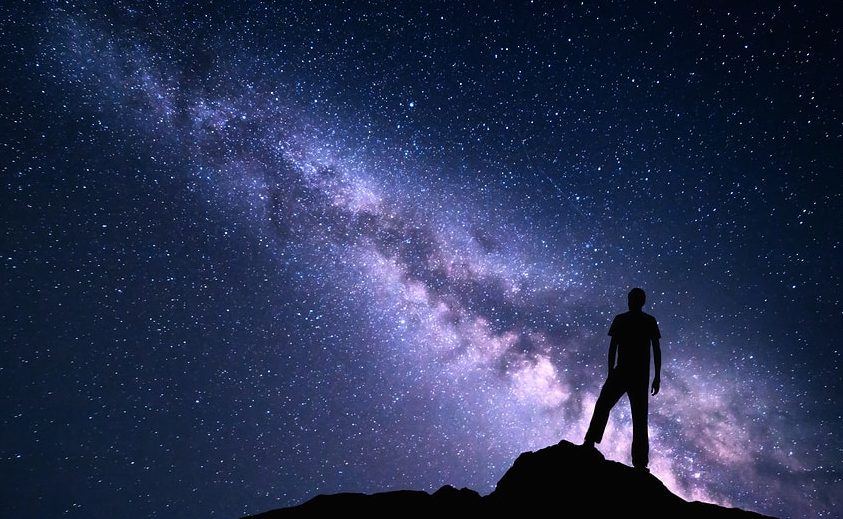 – “A Million Dreams” from The Greatest Showman

Many people make New Years Resolutions. These are plans to improve themselves within the next year. For many, it becomes cliche as people often make them and break them as soon at the year begins.

These could include losing weight, quitting smoking, quitting drinking, being a better worker, make more money.

All may be good ideas, but it relies on follow through.

For me, I do not usually make specific resolutions. I do like to assess what has happened and make goals for how I would like to see the next year go forward.

For assessing the last year, I read a very interesting way of doing it from blog-god and author Tim Ferris. I am including it below as he shared it, because it is a great assessment.

For next year, I cannot express it any better than the song A Million Dreams as seen above. We are amazing creatures living here on this planet earth. And our minds have endless potential. Its about putting those dreams into action.

So I say, keep dreaming and keep making those dreams come true.

I’m often asked about how I approach New Year’s resolutions. The truth is that I no longer approach them at all, even though I did for decades. Why the change? I have found “past year reviews” (PYR) more informed, valuable, and actionable than half-blindly looking forward with broad resolutions. I did my first PYR after a mentor’s young daughter died of cancer on December 31st, roughly eight years ago, and I’ve done it every year since. It takes 30-60 minutes and looks like this:

That’s it! If you try it, let me know how it goes.

And just remember: it’s not enough to remove the negative. That simply creates a void. Get the positive things on the calendar ASAP, lest they get crowded out by the bullshit and noise that will otherwise fill your days. Good luck and godspeed!