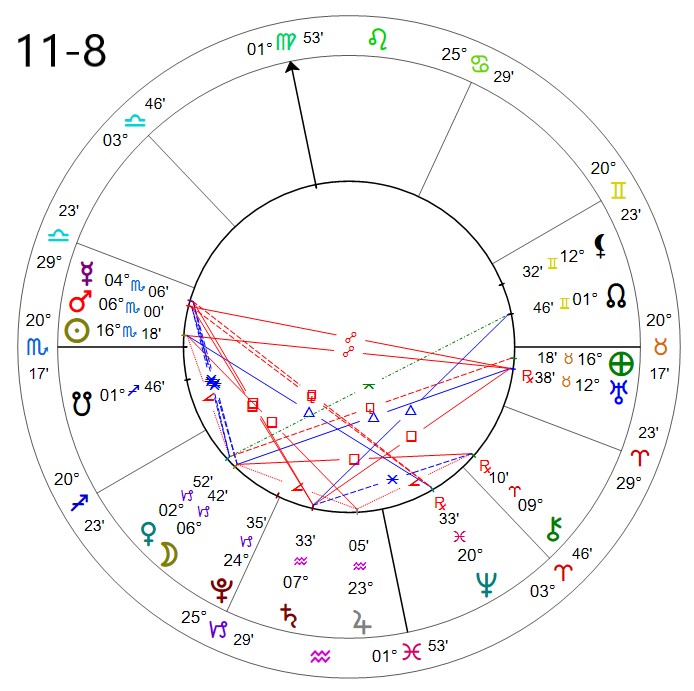 SUN –17 SCORPIO: a woman filled with her own spirit is the father of her own child

EARTH– 17 TAURUS: a symbolic battle between swords and torches

Happy Monday! Believe in yourself, push your limits, experience life, conquer your goals, and be happy!

For the first time in the History of Astrogardens, I must print a Retraction. I do this because something that I published over the weekend was a blatant lie and I did not indicate that in the text.

This was from Saturday with my post about Question Day. I made up a question to make people believe that the Late Night Talk Show hosts had done something. I made it up. Here is the question:

Would it shock you to find out that the Late Night Talks Show Hosts (Colbert, Kimmel and Fallon) all stained the back of their trousers brown in solidarity with Joe Biden?

It is true that I did not actually say that they had done this. But it was a pretty direct hint. And since you read it and it sounded far too plausible, most of you shook your head in disgust about how sickening they were and kept reading.

In Other Late Night Comedy

Over the weekend, Saturday Night Live had the opportunity to break comic gold by featuring jokes about the President shitting his pants in front of the Pope. They also could have made Fart Jokes about Joe Ripping a horrible stinky wet fart in front of Camilla Parker Bowells while at the Globalist Climate Affair. It was funny enough for every British Publication to publish it on page one Sunday Morning. But did the NY Times, WaPo, USA Today, The Chicago Sun Times or any other trash rag in this country mention it? Did CBS, NBC, ABC, CNN, MSNBC or NPR mention it? Hell  No!

I googled “Camilla” and found this on The Independent.uk website. It was just one example:

‘It was long and loud and impossible to ignore,’ source quoted as saying

And people still ask why the US media is referred to as FAKE NEWS. Donald Trump tweeted the word “covfefe” once and it made headlines for over a year. Let that one sink in.

P.S. – I had an ulterior motive toward printing this Retraction. It allowed me to draw attention to it again. I REALLY thought it was funny!