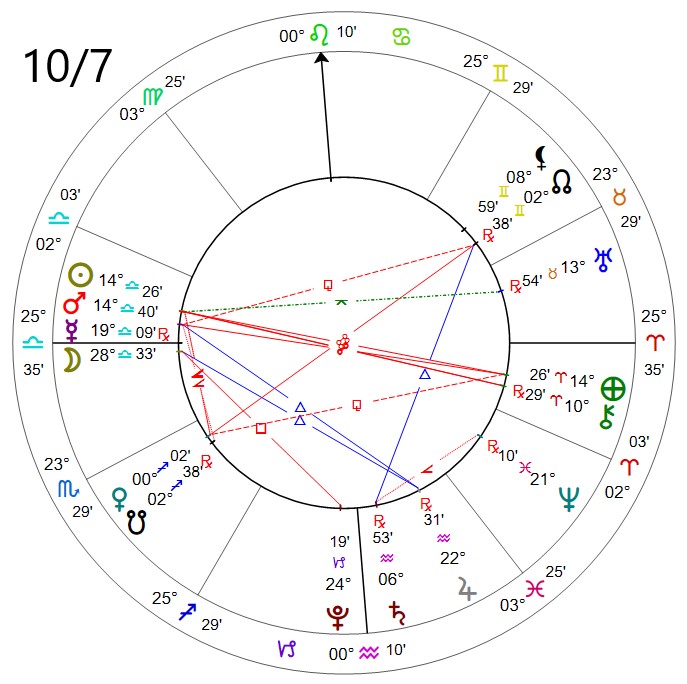 The Air Behind a Big Government PsyOp

Looking at the symbols today, there is a lot of Air behind them. Blowing and Exploding. Add to this the Moon sitting on the cusp of Libra while Trine with the North Node in Gemini and Jupiter in Aquarius. It all brings a lot of Air action into a tumultuous time.

Let’s put some of it together for a look.

First was the “Whistleblower.” May I digress for a moment about whistleblowers. Thanks to the first Trump impeachment, the term “whistleblower” took on a whole new meaning in the mainstream. I still cannot get out of my head every time that Adam Schiff (liberal congressman extrordinaire and pencil neck from California) would use the term. He would intone the word as something akin to “superhero.” And the expectation from him – and accepted wholeheartedly by a complicit lamestream media – was that we should all trust such people with our lives (very much the same way as the lamestream and the Deep State accepted the words of Edward Snowden and Julian Assange?). In watching how the Lamestream uses the word “whistleblower”, I am always reminded of this scene in The Best Little Whorehouse in Texas.

But anyways, for all of you who were paying attention to the 60 Minutes lead up to their Breaking Interview with the Facebook Whistleblower who would be exposing the horrors of Facebook Censorship. Everyone on the right and the Libertarians were on the edge of their seats waiting to hear how they used their bias against political opponents to the Globalist Left. The Democrats and the rest of the people on the Left on the other hand waited with trepidation to see what this person would say.

First was the “Whistleblower” from Facebook came out to the lamestream news about Facebook manipulating their algorithm with the express purpose of 1) Promoting “emotional” engagement, 2) profiting more because of the increased engagement they wrote into the program, and 3) Offering her service to the government as the person who could do this job.

Sorta like as if Joseph Mengele were to come to Congress and claim the Big Pharma is actually Big Harma – and offering his services to the CDC as the watchdog over all genetic testing.

Well guess what. The US has a Whorehouse in It. Lord Have Mercy on Our Souls. And Facebook is just the beginning.

What did we get????? A great Big Turdburger!

On the surface, this is a dystopian horror film. Big Tech wants to monitor itself and codify into governmental law a system to decide what is safe and what is not.

Think first about the name: Civic Integrity Team. They were in charge of determining what is “fake” and what is “acceptable.” And their amazing track record included suppressing information about: 1) Hunter Biden’s Laptop computer, 2) Anything Regarding Tara Reade (the woman Joe Biden pushed up against a wall in a Senate Hallway, 3) Hunter and Joe Biden’s ties to Ukraine and China. Let’s not forget that similar allegations made against Trump that were front page news across the country and on all of the entertainment shows.

Big Tech, like Big Media have become simply the Propaganda arm of the left. And how far away is the name “Civic Integrity Team” from “Thought Police.” And for all the claims that these are “private corporations” and not agents of the government. If you believe that one I have a two stage vaxc1nation program for you if you are interested.

Until I had seen and heard this Turdburger, I thought I had seen and heard it all. But there seems to be no depth to the hole that they come from. No bottom to that barrel. Here we have a Whistleblower offering evidence against absolute clear examples of censorship. And her solution? Totalitarian government control over the the media.

This is NOT a defense for Free Speech. It is an attack on it. And an attack on the freedoms afforded by our Constitution.