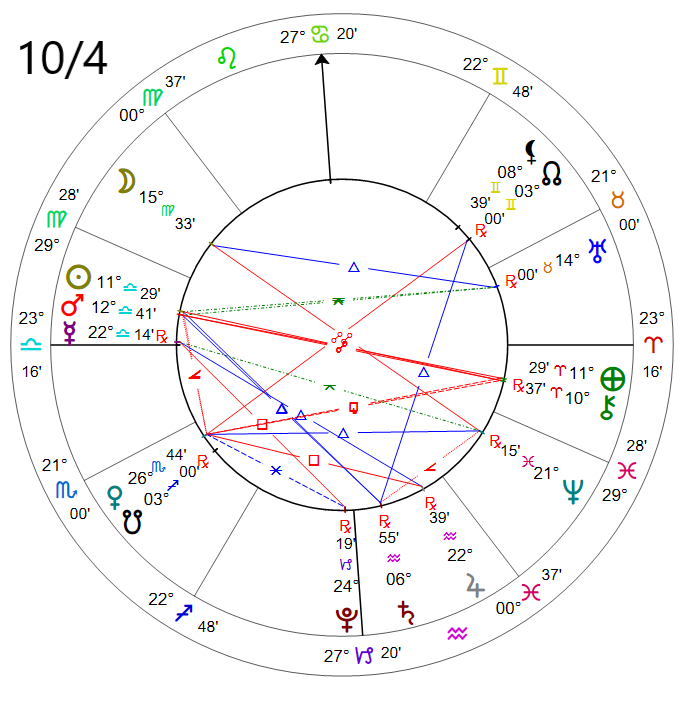 – Planting Calendar (from the Farmer’s Almanac) –  October 1st – 4th –A most barren period, best for killing plant pests or doing chores around the farm.

SUN – 12 : LIBRA – Miners are emerging from a deep coal mine

Happy Monday! Give yourself permission to envision a big life, a happy life. Accept your greatness!

Today as I was posting my Happy Monday messages on Facebook, Zuckerland went dark! I do not know how long it will be but so far I am intrigued. Is it incompetence? Is it Terrorism? Did Anonymus and Q get together and do the world a favor? No matter what happened, it made me smile.

But this is a good time to consider what happens when things fall apart. The shit hits the fan so to speak. And there may be more than a few people wiping stains out of their jeans tonight in Menlo Park, But so far the rest of us are good.

Last week I talked at length about Man Made Global Climate Change (AKA Nuke War). And that even if it did not totally annihilate us, there is a chance it could come in the form of an EMP – Electro Magnetic Pulse.

But what we have to be aware of is that such an EMP will not necessarily come from unsteady hands at the wheel of global governance. There is  a “natural” version.

What is the Solar Killshot?

A Short Explanation of a Solar EMP

I have been following Suspicious0bservers now for about 10 years, so a lot of the astronomical jargon is second nature to me.

A couple days ago I talked about the prospect of political nutcases using a nuclear device to create an EMP – or an Electro Magnetic Pulse. For a more details explanation of what this is, I found a fairly technical but well worded explanation published by the Washington State Department of Health:

The most important mechanism for Electromagnetic Pulse (EMP) production from a
nuclear detonation is the ionization of air molecules by gamma rays generated from the
explosion. These gamma rays ionize the air molecules by interacting with the air
molecules to produce positive ions and recoil electrons called Compton electrons. This
pulse of energy, which produces a powerful electromagnetic field, particularly within the
vicinity of the weapon burst, is called an electromagnetic pulse. EMP can also be
produced from non-nuclear sources, such as electromagnetic bombs, or E-bombs.

High-altitude nuclear detonations and electromagnetic bombs can generate EMP that
has the potential to damage or destroy electronic devices over widespread areas.
Electric power systems would also be at risk from surges produced by such weapons.
However, the EMP from a kiloton-range surface nuclear explosion would not be
expected to produce serious damage outside the radius of severe destruction from blast.

From my discussion, this means if a Nuke were exploded 250 miles up in the atmosphere, though is would not produce any damage down here on Earth, it would knock out all electricity and electronic devices. Gone. Fried. Wires, Circuits all blown.

Nukes Are Not the Only Things That Can Cause and EMP

Now if you are into armageddon-type movies and fiction, you may have seen the results of an EMP depicted on screen. I remember a made for TV movie called The Day After, showing the US before and during a nuclear attack. The “war” begins with an EMP device being detonated and all the power getting knocked out. There is also a extra-special Bill Nye the Science Guy movie floating around entitled “Hollywood vs EMP” The Air Force claims it was made just for them and not available to the general public. But if you search for it on Youtube, you can find enough about it to see what it means.

There is a more “natural” source for EMP’s here on Earth. Our own Sun. You know. That big bright thing that shines in the sky. Much is happening on the Sun. And very little of it is reported back to us in the Mainstream News. To report on it would refute a lot of what Mainstream news uses to justify the present Climate Crisis. It is therefore not a popular subject in the news.

They have been tracking events on the sun for a very long time. And when it comes to Coronal Mass Ejections, what they are generally looking at at Sunspots. The funny thing is that they were first observed through a telescope in about 1610 by none other than Galileo. Now I do not exactly know how in 1610 they created a telescope that would look at the sun and not burn people’s eyes out. But I guess they did. And since that time, there has been one event that has overshadowed all other events as far as severity. And that was The Carrington Event back on September 1th 1889. On that day, the Earth was hit with an X-45,

The X-ray flux chart pictured here notes a pretty active time back in 2015 – with 1 X Flare, about X2 or X3. The x45 from the Carrington Event would be off this chart.

Back in 1889, there was not a lot of technology that people had to work about. Electricity was not common. But what was out there got pretty much fried. Telegraph lines were hit the worst. People operating them were shocked. Wires burned up.

Now imagine where we would be if a similarly sized flare hit us today. How much of our electronics would explode. Cars would not operate. Electrical grids blacked out. Phone systems out. Cell towers burst. All commercial activity stopped. Anything operating on electricity. traffic signals. any public lighting, the internet, pipelines, Vehicles travelling on highways, the water supply. The gas supply.

Literally the end of the world as we know it.

Suspicious0besrvers has a whole lot of videos describing what could happen. Here is one that does a pretty good job of describing it.