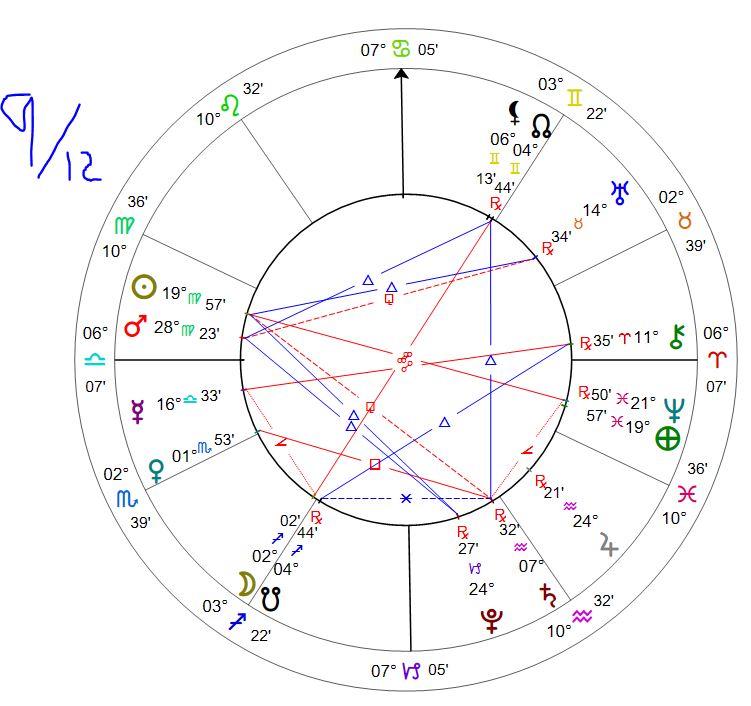 By: alfoss
In: Astrology, Daily
Tagged: crescent
With: 0 Comments

– Planting Calendar (from the Farmer’s Almanac) –  September 12th – 13th – Clear fencerows, wood lots, and fields, but do no planting.

SUN– 20 VIRGO:  A caravan of cars headed for promised lands

EARTH – 20 PISCES: A table set for an evening meal

EARTH – 21 PISCES: A little white lamb, a child, and a Chinese servant

As you see from the set of two Sabian Symbols for the Sun and Earth, we are in that in between time. The crossover from one to another happens within about an hour from my designated time (7:00 AM EST). The sun and earth sit at 19 degrees 57 minutes of their respective signs. Making the symbol 20. But being so close, we will also be under the following symbol for a better part of the day. So I include it. Also note we had a void overnight (daytime for all you Australians) and the Sun is now in Sagittarius.

Consider the vibes of the day, especially in light of the messages that were beamed out over the past 48 hours. Its a somber time. But be prepared. It may not remain so.

Sunday Song of the Day

Hard day today to feel the song. There were more than a few that were bubbling to the surface, but Doin’ Time was the most persistent. Not sure if its the viboe or the beat. But it’s been there all morning.

That being said, I have a second song that for me is just as strong. But I think it’s just me. I like the song – a deep track from the album Seventh Dream of Teenage Heaven by Love and Rockets. I’ve included it in case you want to go on a musical journey with me. But not sure if it means anything. If you want the meaning, Do some time!

The Dog-End of a Day Gone By