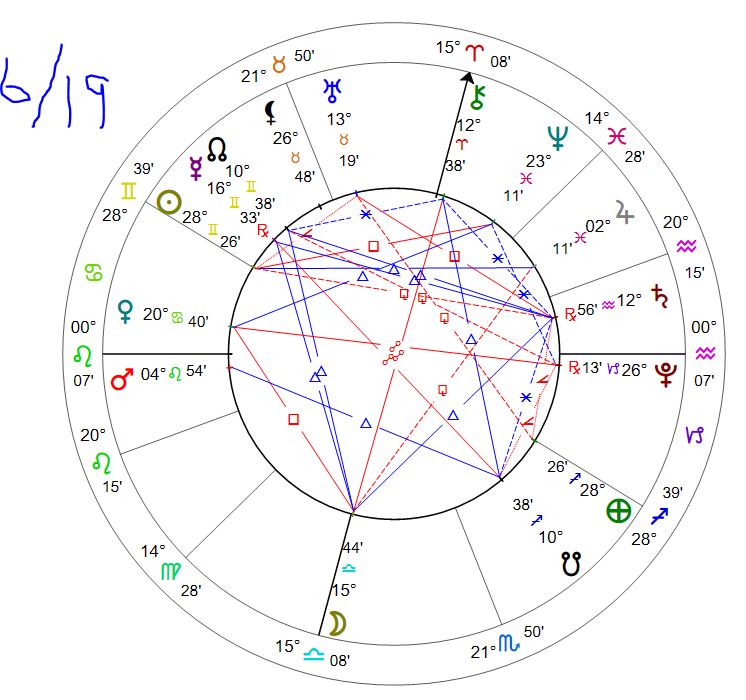 – Aspect of the Aeon Thelete: (Will/Desire): Ian – The Wind of the East – Kathe is Coming with the Solstice – God of the South

29 GEMINI: The first mocking bird of spring sings from the tree top

Today is Saturday, June 19th. By date it is Juneteenth. I am coming off quite a hangover from all the government mandated festivities of the newly declared National Holiday commemorating . . . well the same this as Memorial Day, but who is really counting. (If you want to read all my comments about Juneteenth, read yesterday’s report or the report I wrote a year ago – linked below)

As for today, let’s consider some more pressing things. Specifically some lessons learned from The Hunger Games.

Now exactly how did I get from Juneteenth to The Hunger Games?

That is simple. The Sabian Symbol for today is “The first mocking bird of spring sings from the tree top.” The mocking bird is very prominently featured in The Hunger Games – as a hybrid genetically engineered bird called the Mocking Jay – which became the rallying symbol for the revolution (PS If you have not read the books or seen the movies, being that you must have been hiding under a rock, I am not revealing any spoilers by telling you this).

The  Mocking Jay was proof that Government Engineering could not completely wipe out all beauty in the world.

And the point I wanted to get to was that there is never enough time to prepare for when the Shit Hits the Fan (SHTF for short). Are you ready or prepared if there is a catastrophe that ends life in this world as we know it. That could be anything from Nuclear War, to being hit by a meteor, to a solar eruption or the Government simply decides to take over (consider how the Uighurs of Western China feel about now after the Chinese government threw them all in reeducation work camps.

Do you have Food? Water? Clothing? Shelter? Protection (weapons)? A simple Plan? A more detailed Plan?

When I began Astrogardens, these were some of the themes I wanted to pay attention to. I began with my garden. And after 3 years, it still would not sustain our family. But the lessons I have taught myself about planting, cultivating and preserving food have me a little bit further along the way.

Speaking of preserving, today is a Jelly day here. We will be making and canning Cherry and Tripple Berry Jams. Last week it was Strawberry, Raspberry and Banana/Pineapple Jams.

Now you might ask how will these help me during a SHTF event? If the 2020 Plandemic taught us anything, it is that there are MANY MANY things that we need to pay attention to.

Some of our canning was for fun and entertainment. It was something to do while we could not participate in Summer activities (vacation, the local pool or even being out in public).

We found local sources for inexpensive fruit. Rural Pennsylvania is great for Farmers Markets, Orchards, Farms and Co Ops. We buy fruit seconds from the Orchard – meaning we pay less than half price. We have stocked up on canning supplies – jars and lids. This will yield jelly, jam and fruit sauces (think apple sauce) to use over the winter (sure we use the Jellies and Jams more as gifts).

From the garden, we have both Cucumbers and Tomatoes for canning. We have made Pickles pretty successfully. And we are looking for recipes for tomatoes for later in the summer. Salsa? Stewed Tomatoes? Plain Canned Tomatoes? All of these will store for a significant period and be ready for use if the SHTF. We will be at it for the rest of the summer. Unfortunately we do not always align with how the Farmer’s Almanac suggests you do it, but we have to take advantage of the time we have to do it.

These are small steps that will not get us to the end goal of being ready in the case of an emergency.

The Lamestream will have us believe the the world is coming to a catastrophic end due to Climate Change. And while I have many reasons to dispute what they are saying, I will agree on the point that we could face catastrophe. And when we do, there are few people who are prepared for whatever the aftermath may be.