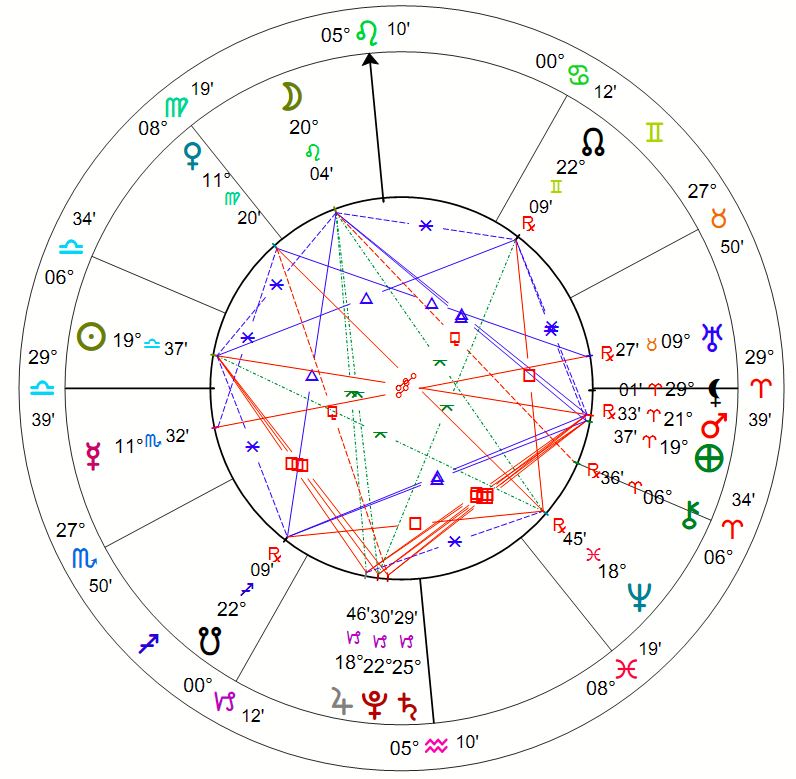 – Gardening tips  (from the Farmer’s Almanac) –  October 10th – 14th – A most barren period, best for killing plant pests or doing chores around the farm.

16 LIBRA: after a storm a boat landing stands in need of reconstruction
17 LIBRA: a retired sea captain watches ships entering and leaving the harbor
18 LIBRA: two men placed under arrest
19 LIBRA: a gang of robbers in hiding
20 LIBRA: a Jewish rabbi performing his duties

Happy Monday! Live with Enthusiasm, Smile for no reason, Love without conditions, Act with purpose, Listen with your heart, And laugh often!

“I saw the crescent
You saw the whole of the moon”

I am catching up  since last week and posting the charts that I missed. I want to say welcome back to anyone who was watching and noticed I had not written in a few days. I do not have a “reason” for not writing. But I can point to some astrology over the past few days that might explain it.

One of the main things that is pressing on our emotional bodies is sadness over the passing of the way we used to live life and hopelessness about the way life is and may be in the future.  This underlies much of our experience at this time, but it is stronger today with the Sun discharging the energetic of “a retired sea captain watches ships entering and leaving the harbor.”

. . . this weekend is the time for living life.  Worrying about and trying to control changes is pretty much a waste of time, so let’s avoid that as best we can.

I add an additional wrinkle to this energetic as Saturday was my Black Moon Transit day – one of two days of the year where the energy is most intense.

And I was feeling it pretty hard since Thursday. I am not an outwardly emotional person (at least I wasn’t until about 3 years ago). This was not so subtlly reminded to me while I was out driving and listening to the radio. The song “Whole of the moon” by The Waterboys came on. And I began to cry.

As always, there is a back story to this. 3 years ago, we lost a child. We are foster parents and take care of babies – usually medically fragile. In the past 10 years, we have cared for a number of drug babies. The child we lost was a little girl who we became involved with when she was about 10 days old and was in the hospital detoxing from Opiates. She was abandoned there by her birth mother, who did not officially name her or sign a birth certificate. After 18 months, a birth father came forward and he eventually was given custody. And despite the best laid plans by the courts, lost to us forever.

In my 53 odd years on this planet, I have lost many people. And 2 of those losses were what I would call life changing for me. My father when I was 25 and Jade when I was 50 (Wow, I had not put those two significant ages on paper before until just now).

Back to the story.

As I found myself a blubbering mess behind the wheel of my car, I started putting the astrological aspects together and realized what it was I was dealing with. And on my own came to the same conclusion that Laura wrote later that day and I read in the report the next day.

As so often happens with me, strong messages come to me with music. It arrived with a strong memory and a lot to think about and reminisce. In the end, I took it to heart and spent a lot of my weekend more relaxing and not accomplishing a whole lot. Sometimes we need a weekend like this.