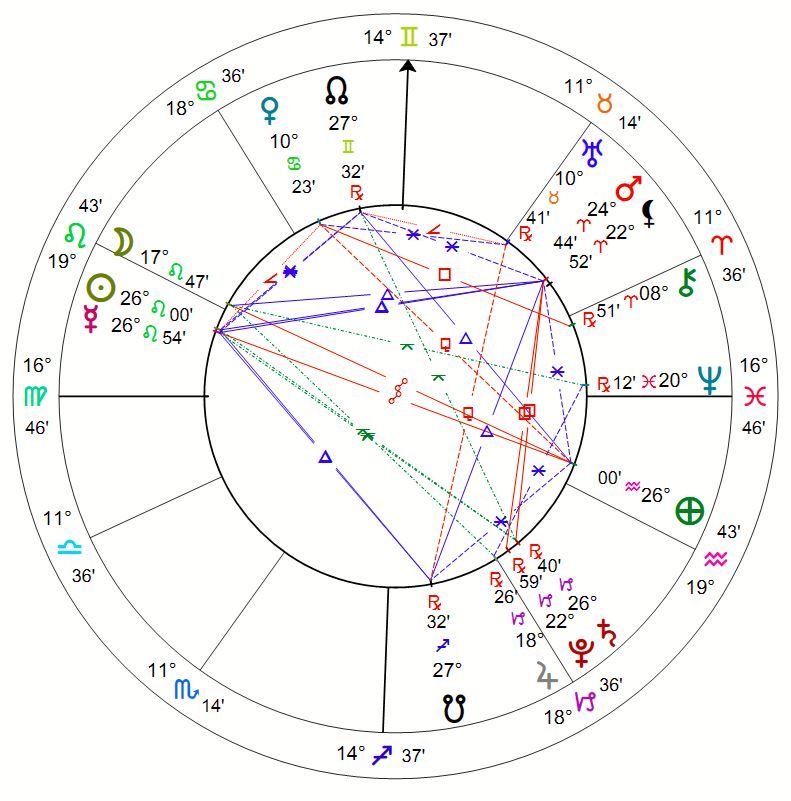 – Mars is Trine the Sun and Mercury through the 20th

SUN:  27 LEO: Daybreak — the luminescence of dawn in the eastern sky

We come to the end of the Second Cancer Lunar phase of 2020. This evening will see the New Moon phase in Leo. I am including both the Astrology Chart for this morning at 7:00 AM EST as well as the New Moon Chart at 10:41 PM this evening for comparison purposes.

The Sabian Symbol for today and for this Lunar Month at 27 Leo is “Daybreak — the luminescence of dawn in the Eastern Sky.”

“The Wheel of Time turns, and Ages come and pass, leaving memories that become legend. Legend fades to myth, and even myth is long forgotten when the Age that gave it birth comes again. In one Age, called the Third Age by some, an Age yet to come, an Age long past, a wind rose above the mountains. The wind was not the beginning. There are neither beginnings nor endings to the Wheel of Time. But it was a beginning.”

I mentioned before that I finished The Wheel of Time book series. The quote above sums up a lot about the series, as each of the 14 books start with some version of this. So let’s start the Leo New Moon phase with it!

So for me, I am beginning a few things.

If you have been following me for long, each year I go on a cleanse diet. I’ve done it for the past about 4 years. It is not specifically for losing weight, though each time I have done it I have lost between 10 and 20 lbs.

What I have followed is a 30 Day Reset. It is an extreme diet that takes lots of work. You must cut out ALL processed food and ALL processed sugar. What I am following is “Eat Well – 12 Habits of Success”

Its a pretty good idea if you ask me. i started yesterday, using the friendly downloadable log sheet (Its like coloring pages for grown ups). And I have to say, it was super effective.
Every time I went to eat something – chips, a piece of candy, soda – I stopped myself and asked if I really wanted it. If I really needed it.
Eat Well – Habit 2 – Lead with Protein
It basically says that every meal should start with 20 grams of protein. Meat, Cheese, Nuts, Legumes. Protein is filling and it sets the building blocks toward better nutrition utilization.
If you are interested in this, you can find theis group on Facebook at:
https://www.facebook.com/groups/betterinaweek/
I will let you know how it goes.

As I mentioned the other day, i have started reading the Harry Potter Series. Monday morning I finished the Sorcerers Stone and I am now moving along through the Chamber of Secrets. I love the speed of reading YA books. Especially the first few Harry Potter Books. These were rolling far before the movies began. And while reading it, your mind’s eye still sees the characters as cartoony. But that doesn’t stop the fun.
I think that the Daybreak “luminescence” theme for the month speaks perfectly to the idea of talking about and finding ways of defending ourselves against the darkness that we see around us every day.  And the Ancient Pottery Bowl speaks of a rich and vibrant past – filled with ancient secrets. The Mystery Schools taught this information. Until they were forced underground. Or out of existence.
Stay Tuned!
2020-08-18
Previous Post: Happy Monday! August 17, 2020
Next Post: DADA – Who do you listen to?