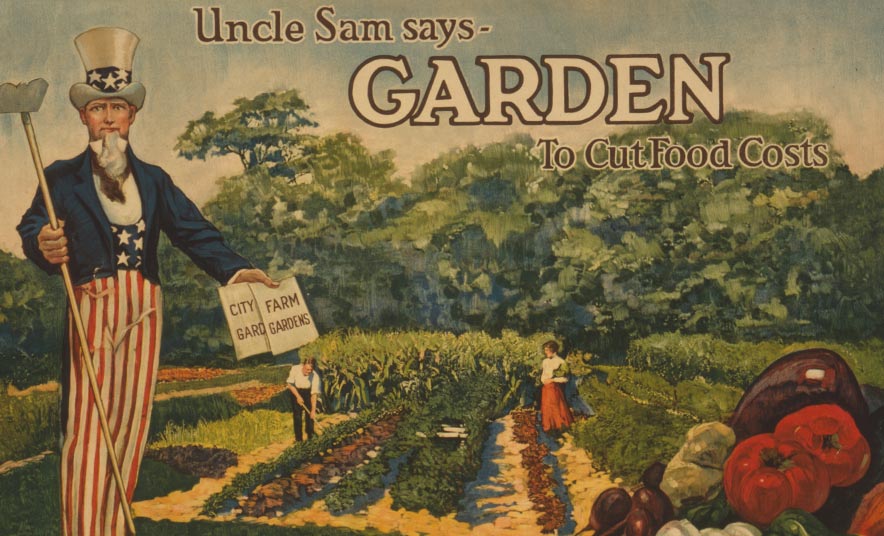 Victory Garden in the Zombie Apocalypse 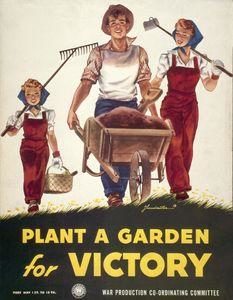 When I began research on what to do with my garden this year, one of the resources that I found was about “Victory Gardens.”  So I must begin with everyone’s favorite resource for interesting (albeit potentially flawed) information, Wikipedia:

“Victory gardens, also called war gardens or food gardens for defense, were vegetable, fruit, and herb gardens planted at private residences and public parks in the United States, United Kingdom, Canada, Australia and Germany during World War I and World War II. George Washington Carver wrote an agricultural tract and promoted the idea of what he called a “Victory Garden”. They were used along with Rationing Stamps and Cards to reduce pressure on the public food supply. Besides indirectly aiding the war effort, these gardens were also considered a civil “morale booster” in that gardeners could feel empowered by their contribution of labor and rewarded by the produce grown. This made victory gardens a part of daily life on the home front.” Wikipedia – “Victory Garden”

Honestly the only things I knew about Victory gardens were from old cartoons and black and white kids shorts like The Little Rascals. And for anyone wanting a course on wartime propaganda, these are a great study.

But the idea was pretty simple. Back in the 30’s and 40’s, resources were scarce. We were dealing with  the Great Depression and world War 2. And people needed food. So why not encourage people to fend for themselves and grow a garden.

The funny thing is, the advice that was offered to people about private gardens was really pretty good. It offered ideas about crops to grow and how to keep it sustained. Let’s face it, the food you grow will not be all that you will need. But it does provide fresh vegetables and fruits that were not available.

So Why is This Relevant Today?

Right now, I believe that following this process of creating a Home Garden to be of vital importance. That’s me. And my reasons, while some might say sound like they are coming from the mind of a raving lunatic, are pretty sound.

So for me, it is not so much for Victory, but rather for protection. Am I going to go so far as many preppers and begin storing long term food supplies, water filters, Alternative power sources? Not yet, but that may be next.

For now, it is transforming my yard into a positive growing environment that will produce healthy food for my family to eat. And if I can do so, while entertaining people and offering sound advice, then it is a bonus.