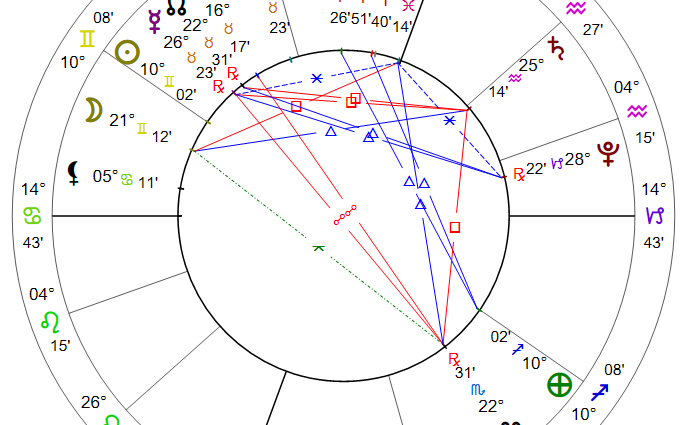 – Planting Calendar (from the Farmer’s Almanac) –   May 29th – 31st – Any seed planted now will tend to rot. First day is a good harvest day.

– Aspect of the Aeon Sophia: (Wisdom): – Bagalamukhi (The Stabilizer, The Storm Calmer)

EARTH – 11 SAGITTARIUS: the lamp of physical enlightenment at the left temple

I awoke from my Mercury Retrograde nap with quite a hangover last night. Mercury will station direct on Thursday, but I have always been an early riser. So after I outlined the New Moon in Gemini aspects last night, I went to prepare the email. AND GUESS WHAT!?? My Mailchimp account was ERASED! It is as if it never existed.

I realize that this is a free service. And in all liklihood, I violated some tiny-lettered contractual obligation by not using the service for 26 days. If I ever get ahold of them, I am sure this will be the story. BECAUSE it could not possibly be becasue I violated their decency standards by talkig about:

Brandon and his circus of Clowns

Joe Bidein shitting his pants in front of the Pope

The Cabal cheated in the 2020 election

The 17th letter of the Alphabet

The Lamestream media is a biased mouthpiece for the Cabal

Let’s face it. Any one of these subjects could earn me a Facebook Big Brother warning banner or a 1 week suspension from Twitter. And every time it has happened, I celebrate it. I celebrate as it is further proof that THEY will do everything in their power to stifle the voices speaking against them. I celebrate because I know I am doing my job right.

So What Can We Talk About Today?

I was triggered by a couple news stories today.

Kellyanne Conway’s New Book – Trump’s former campaign manager and Counselor to the President has written a “memoire”. And part of her book tour was to stop in and talk on the CBS Morning show. And please take note. This is WHY I say these idiots are biased.

It was funnier that they started by talking about her role as a “woman” in that environment. Then they started to attack her from every angle. Proving that despite everything about their progressive persuasions, if they do not like you they can disrespect you in force.

Now, am I going to buy and read this book? No. But what a shitty way to treat a guest.

Sussman Jurror “There are bigger things than lying to the FBI” – For all of you who missed it (not difficult as the lamestream did not cover it), Clinton Layer Michael Sussman has been on trial for lying to the FBI about the Famous Steele Dossier – a completely fabricated report bought and paid for by the Hillary Clinton Campaign and used to force an investigation into Donald Trump and the famous “RUSSIA COLLUSION” in the 2016 election.

In the trial, Michael Sussman was accused to lying to the FBI about his representing the Clinton Campaign when he brought the dossier to them, as well as the fact that he was directed to do so by the Great Hillary herself. After presenting it to the FBI, they then leaked it to the Mainstream media.

This dossier caused a 2 year investigation by the FBI, Justice Department and the Mueller Team. The direct cost to the government was over $30 million – all based on political lies.

This morning, Michael Sussman was found not guilty of the charge. The Prosecuter was a Clinton Supporter. 3 of the Jurrors were Hillary Clinton donors. 2 others were democrat party supporters. The Judge was Obama appointed.

And I ask you to look again at the comment above in bold. There are bigger things than lying to the FBI. Based off of that, they clearly biased jury aquitted (not a shock to anyone.

What do you think this means of our judicail system? Can ANYONE trust a judiciary and system that is obviously willing to look the other way when people they agree with may not follow the rules. Laws do not matter to some. There are bigger things.

Go ahead and Lie!

The Queen’s Platinum Jubilee Central Weekend 2022 – This was also on the morning news. From June 2-5, Britain will be waving their flags and parading all over the country. And I noticed something said by the reporter that just made me fume.

Her comment went something to the effect, “This is our way of thanking the Queen for her 70 years of service to Great Britain.”

All I have to say (or question) is, does this mean all of you brits are going to go down on one knee and lick her boots? WTF. She is a Multi billionaire who owns all of your asses. And you are thanking her??????

I am going to throw up now.

Now What to do about the Monkeys at Chimp

Now I do not know if I lost my email service provider over the subject of free speech, over a hack, over incompetenceor whatever. I just know I cannot access it.

So first, I have put in a support ticket to see if they will answer it. As with other “free” email services, they do not provide live support to non paying customers. In fact finding where to log the complaint was all but impossible. They give themselves 2 days to answer me. I am not holding my breath for any kind of positive result.

Second, wait. Mercury stations direct June 2. And it does me no favors to start a new electronic/communications project while Mercury is Retrograde.

Third, something new. If Chimp comes through, I will get my list back. If not, it will be back to the drawing board. Which may be a good idea if I get it back as well.

Its the New Moon Phase. Time to start something new. And my Happy Monday message says the same. I am looking for growing.

There is a whole lot going on out there. We need to Pay Attention.