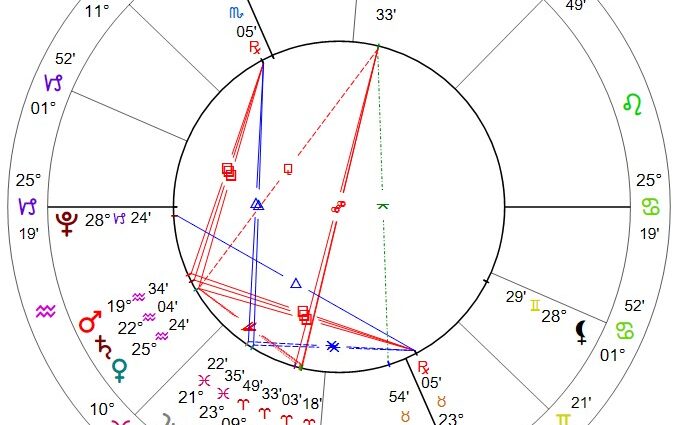 EARTH – 12 LIBRA: miners are emerging from a deep coal mine

The astrological year begins at the New Moon in Aries each year. The energy for the year is imprinted on this day and carries themes throughout the year. Some of these themes will resonate specifically with each of us. And how these will take effect often have to do with your own chart.

So take a look at the symbols for the year and pay attention to them. If you have your own chart handy, compare it. Are there important conjunctions? Do you know how things impact you?

EARTH – 12 LIBRA: miners are emerging from a deep coal mine

CHIRON – 13 ARIES: a bomb which failed to explode is now safely concealed

SOUTH NODE – 24 SCORPIO: crowds coming down the mountain to listen to an inspired man

SATURN – 23 AQUARIUS: a big bear sitting down and waving all its paws

VENUS – 26 AQUARIUS: a garage man testing a car’s battery with a hydrometer

JUPITER – 22 PISCES: a prophet bringing down the new law from Mount Sinai

In addition to being the energetic set for the New Year, it is also something to pay attention to specifically for this lunar month beginning in Aries. And I will specifically call attention to Mercury’s energy.

Mercury will be dancing in 3-way conjunction between a number of plantes and the Sun. Specifically:

So pay attention to the energy as the days arrive.