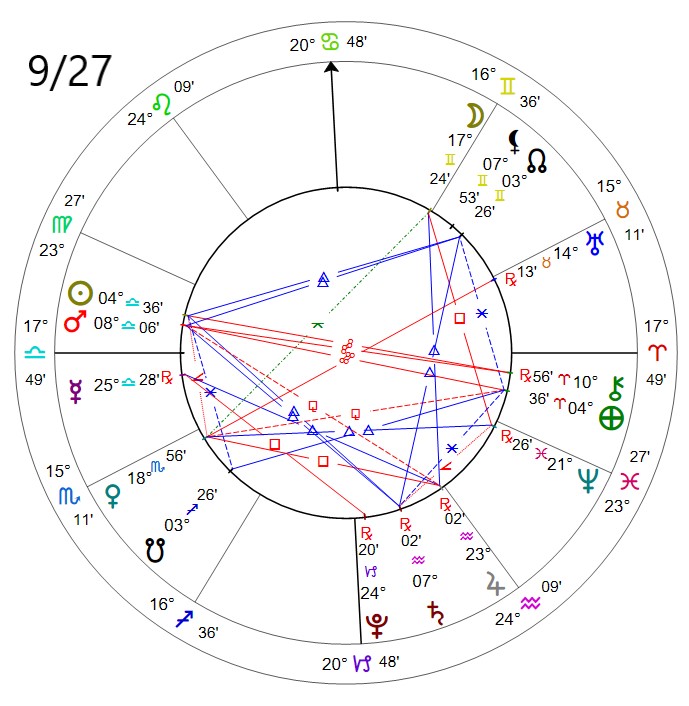 SUN– 05 : LIBRA – a man teaching the true inner knowledge of the new world to his students

EARTH – 05 ARIES – a triangle with wings

Happy Monday! Spread your wings, have clear vision and soar to new heights.

Mercury Retrograde has made the mainstream this year. If you search in Google for “Mercury Retrograde September”, the Number 1 article is from . . . Cosmopolitan. If you bother to read it, you will find it chock full of every Mercury Retrograde cliche and . . . you guessed it. This one will have its primary affect on relationships. It also forecasts Social Justice incidents as well as Toxic Individualism.

Take a look at it if you want some yucks and giggles.

Note also that on Duckduckgo, the Cosmo article appears. It is the 3rd citation rather than the first. But its up there. The number 1 article isn’t bad though.

Looking at the Sabian Symbol

To get insight into an astrological aspect, you can look at the Sabian Symbol for the degree of the zodiac where the event happens. For Mercury Retrograde, Mercury is at 26 Libra – “An eagle and a large white dove turning into each other.” This is a positive symbol in my mind. And helps to drive a positive energy into this retrograde. Remember Mercury Retrograde is about reworking things and will tend to show itself with communication, electronics and travel.  Never a good time to start something new.

But the Patriotic Symbol of the Eagle (here at home in the US, that is) is what has me thinking. A couple weeks ago Laura Walker did a live broadcast with Phoenix on the Patriot Intel Report. If you missed it, check it out HERE.

During this interview, they brought up a concept that I found very interesting and worthy of further discussion. Laura was talking about life in 5D – or the 5th dimension. This is where time and space get muddled in between multiple possibilities of life. These would be alternate realities where there may be differences in a single aspect of life, and how the ripple effects have the chance of making profound changes in reality.

In this discussion, Phoenix mentioned what he called the Matrix of Information. You ask yourself about what is the source of information and what you might be able to trust. And looking at the chart, I would imagine it is a roadmap positioned on a sign pointing Down the Rabbit Hole. Reality is not what we see presented on the news. And the level of propaganda now being paraded across the airwaves makes 1984 seem like a ride as Disneyland.

Unfortunately when you look at the Matrix, the immediate thought is that it resembles something that might have been presented by Alex Jones. Alex is a person who was at the beginning of the Great Purge. In the year prior to the Plandemic, they Cancelled Alex Jones for continually going off script. They took away his show, banned him on all media, across the Internet Facebook, Youtube, Twitter. Demonetized all his sources. Removed his site from the Internet.

I believe that the takedown of Alex Jones was the test run for what would happen with the 2020 election. The Mainstream had had their clock cleaned by people that they could not control in the 2016 election. Among the many plans launched after that election, it was control of Social Media that was the key. And there was Facebook Twitter and Google right there ready to do their biddings and hide behind the Curtain of “Private Coportations.” Sorry to say this guys. But when you are taking orders from someone outside your organization, it is still censorship.

I would offer a huge thank you to President Trump on shining a light on the accuracy of information that is presented to the public.

So this Matrix of Information illustrates sources of information (whether you know about them or not) that will lead to the kind of knowledge that will get us shot by the cabal.

So Who are “THEY”

You can google this information til you are blue in the face or your head explodes. I went on a scavenger hunt and found some succinct graphics and descriptions that will give an overview of these controllers or whatever you want to call them. This is a partial list. But it illustrates the basic globalist structure.

Start with The Round Table. This names names and takes prisoners so to speak. You have probably heard of a lot of these players. Though you also probably never knew what any of them were about. For the USA, first look to the two main functionaries of this graphic. The Council on Foreign Affairs and The Trilateral Commission.

WHAT DO YOU KNOW ABOUT THESE GROUPS? Look them up. They are not hiding. The question is Who is part of these organizations and how did they get there? Who funds them? You would think that groups like these sound like Government Agencies. But are they? Who controls them???

Work your way further around the circle and continue asking yourself. Who 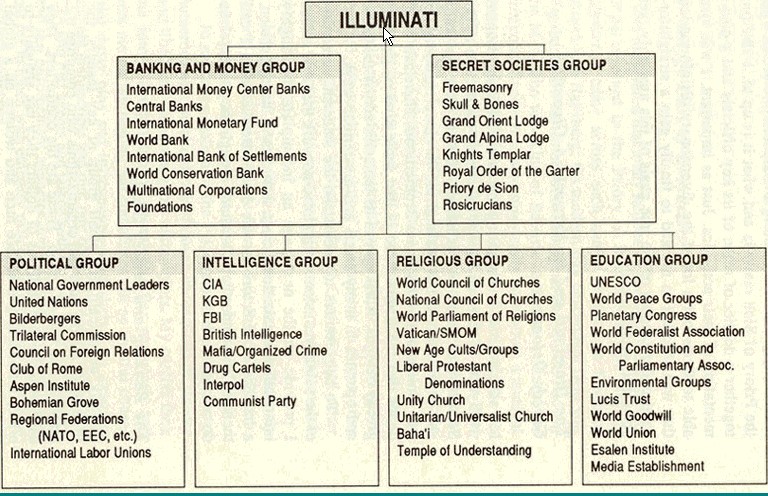 Take a look at the second graphic and consider all of these other organizations and how they fit in to the puzzle? Are they elected or appointed by governments? Do they really represent anyone?

Consider all of these and ask yourself. Just who is running what in this world?

SONG OF THE DAY – Muse – Uprising.

Is it because all of the things that have been running through my head with this post? Probably!