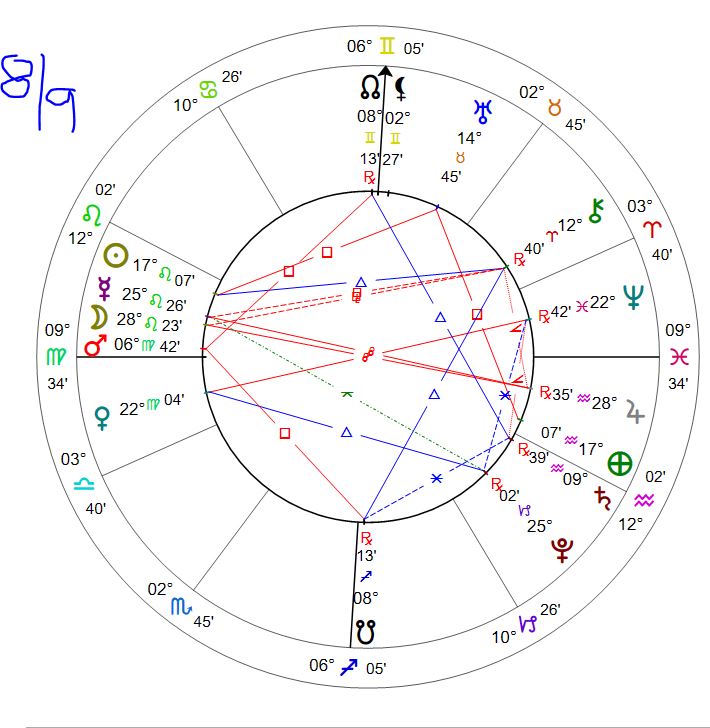 SUN – 18 LEO: A chemist conducts an experiment for his students

EARTH – 18 AQUARIUS: A man being unmasked at a masquerade

Happy Monday! “Let us be grateful to the people who make us happy; they are the charming gardeners who make our souls blossom.” – Proust

Welcome myself back to my little Astro Garden here. I was 4 days commuting back and forth to Philadelphia. Our youngest son, who is six, had surgery on both his legs for Hip Dysplasia. It was expected as he is unable to walk or stand. It will prevent pain in the future. That being said it is never easy. And with all of his other conditions, we are just glad he is home.

But it meant that I had 4 round trips to Phili – which generally means 1 1/2 to 2 hours on the road twice a day. I finished the audiobook for Mark Levin’s American Marxism. For me, there was not a lot new in his book. I have been fully aware of the creep of Marxism into pretty much every part of our lives. AND that it has been an intentional progression designed by the American left and their friends around the world. But his insights offer a roadmap to what we need to do to both defend ourselves and push back against their efforts.

But more on that in later posts. I want to focus on the something new I found out listening to this. It was a small insight that speaks volumes.

Who was Karl Marx?

The brain trust at Wikipedia described Karl Marx: a German philosopher, economist, historian, sociologist, political theorist, journalist and socialist revolutionary. Each of those “brilliant” words are hyperlinked to important Wikipedia descriptions to explain what they mean to the unwashed masses that may come to read their posting about him.

And you wonder who he was and what he did. Popular culture knows him for 1) Writing the Communist Manifesto and 2) popularizing the phrase, “Workers of the world, unite! You have nothing to lose but your chains!”

Now, the Communist Manifesto was written in 1848. It was in response to the horrible working conditions in Europe. And the movement was popularized as a way of improving these conditions and levelling the obvious Class structure that separated the “workers” (AKA the proletariat) and the “ruling class” (AKA the bourgeoisie). It called for class warfare to start a “Workers Revolution” to throw down the Ruling class and create a workers paradise.

For all that history talks about the Communist Manifesto, you would think it was this holy tome of beautifully written philosophy. I highly recommend downloading a copy of it and actually reading it. I have done so more a few times. No not due to the indoctrination I received in College back in the Eighties. More because I wanted to know what it said. And after reading it (takes less than a half hour), I was underwhelmed.

The Communist Manifesto is a 20 page pamphlet. It is not filled with philosophy. It is filled with ridiculous hyperbole about working class struggle and an outline of how to overthrow the existing society.

If you ask me, it was a perfectly written sales letter. He chose his market (disgruntled workers). He follows the basic AIDA sales letter format. Attention – Interest – Desire – Action. And then acted like a match on gasoline on an already dry field of grass.

His message worked. People United. People revolted. 60 years later you had the Russian Revolution. 30 years after that you had the Nazis. Today we have the CCP.

It did achieve a couple World Wars, countless Civil Wars, A Cold War, Nuclear Proliferation and Misery for the masses – with the spoils for a select few (consider how China can have over a thousand people in its country that are classified as “billionaires” while the US has less than 700).

Marx, At Heart, Is Just a Journalist

For all of his pedigrees bestowed by Wikidia, in the end, Marx was a journalist. Did you know that Marx was a columnist for The New York Tribune? Why yes. Spreading his bile here in the United States. And while he was popular, his movement did not catch fire in the way that it did in Europe. This was mostly due to a different class structure and an attitude of Liberty, Freedom and Equality that did not exist in Europe.

But as a Journalist, he was able to practice the same kind of writing that we see in writers today. All written from a distinctive bias or point of view. All written to justify and glorify the Communist workers movement. And all published as . . . NEWS.

Here is where we have today the intersection of our reality with the movement and beliefs of Karl Marx. In the US, we did not have an Upper Class and a Lower Class with strict boundaries (bloodlines) on who could participate. We did have, and do have, other dividing lines. Race being a big one. Gender being another. But you find the dividing lines being drawn in just about everywhere in society today. And they are being drawn intentionally to sew the seeds to division.

I remember growing up in the 70’s and 80’s. When I would pull myself away from good programing like Baseball games or nighttime sitcoms, I became disgusted with the News people. I specifically remember Sam Donaldson and Dan Rather. Let’s go back to the 1980 election. We have been through the worst 4 years of our existence under President Jimmy Carter. The economy was in the Tank with the worst Recession ever. Gas lines were everywhere. We were an international laughing stock with Iran taking our embassy hostage.

And on election night, these two clowns did everything BUT wear Jimmy Carter buttons.  They both seethed hatred toward Ronald Reagan throughout their broadcasts. And all of this was in a country that prided itself on “freedom of the press” and Unbiased Reporting.

The idea that the news was unbiased then was a joke and everyone knew it. But we lived with it.

But it speaks to the heart of what Karl Marx brought to the world. They could use their positions of authority over the airwaves to espouse a Point of View and be looked at as credible.

Fr me personally, I appreciate biased reporting. BUT ONLY when it is specifically noted as such. If I go to the Fox Pundits (Hannity, Carlson, Ingraham) or MSNBC (Rachel Maddow) I know what I am getting. They report aout the news and tell people their opinions.

The problem is when a News Outlet calls themselves “News” and then acts the same way as the Pundits. Cases in Point:

These are glaring examples of super-liberals sitting in positions of Authority. Reporting extremely Biased Opinion masquerading as NEWS.

Marx’s influence is still here with us 140 years after he died. And I will continue to expose it whenever I see it.