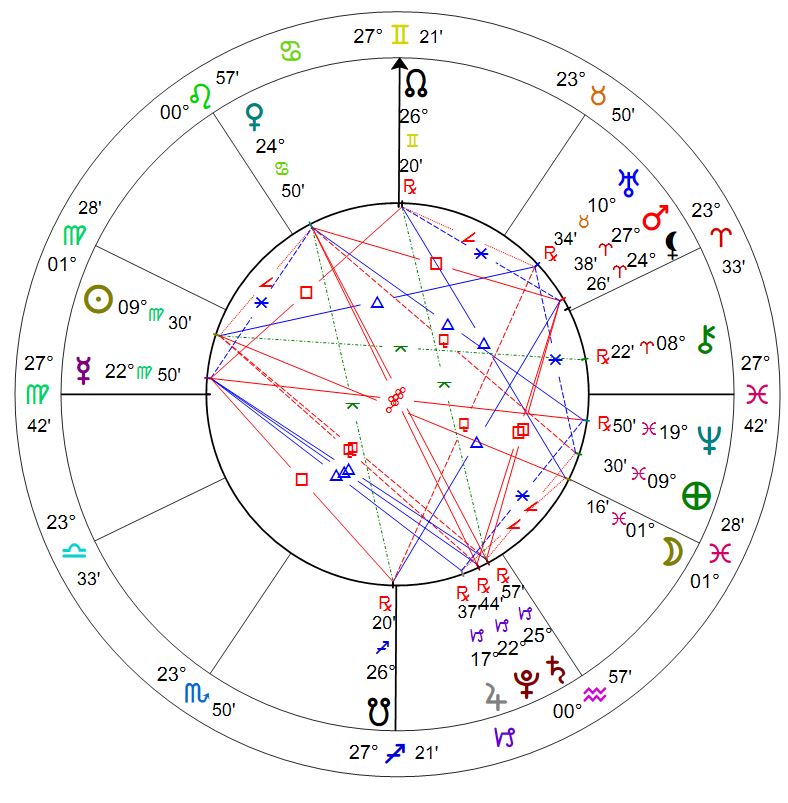 – Venus is making a trine to the Black Moon and Eris

– Sabian Symbol for the Solar-Lunar Month – New moon in Leo: “Daybreak — the luminescence of dawn in the eastern sky” (& Earth An ancient pottery bowl filled with violets)

SUN:  10 Pisces: An aviator in the clouds

EARTH:  10 Virgo: Two heads looking out and beyond the shadows

Mercury the Messenger goes into a trine with Pluto the Transformer today, and the Sabian symbols involved tell us to be fearless. Messages and information flow today to further the deconstruction of the archontic world and the construction of the free world.

Mercury is at 23 Virgo, “a lion-tamer rushes fearlessly into the circus arena.”  Pluto is at 23 Capricorn, “a soldier receiving two awards for bravery in combat.”

Being fearless and being brave are the same thing.  -Laura Walker

Last year around this time, I wrote an installment of Defense Against the Dark Arts about Fear. What are its Roots? What are some Examples? What can you do to dispell that fear.

And dispelling that fear is about creating fearlessness.

“I must not fear. Fear is the mind-killer. Fear is the little-death that brings total obliteration. I will face my fear. I will permit it to pass over me and through me. And when it has gone past I will turn the inner eye to see its path. Where the fear has gone there will be nothing. Only I will remain.” -Frank Herbert

If you have a few minutes, read it here – then come back and read some more:

Here is the “Some More” Part

The causes of fear are innumerable, because fear is in the mind. Spiders, for instance are natural. They live everywhere. You can try to keep them out of your living space. You can clean. You can spray chemicals.  For the most part, they will avoid us – content to eat flies and other bugs that are ensnared in their webs.

But then there are the other times – like when I was bit 4 years ago by a spider while I was sleeping. I was in a bed, in New Jersey, in a nice house. Whatever possessed it is unknown.

Am I more afraid of them now? I would say no. But it may be because they are not snakes. No thanks to them!

Fear at the Heart of Things

Looking at 2020, I would suggest that fear is at the heart of pretty much everything going on.

Fear of the Coronavirus

Fear of a race war

Fear of the election, lockdowns, police, other people

And standing in front of us all are the media and entertainment industry fanning the flames.

And ask yourself what the source of all this fear may be? Is it a single source? Mutiple? Working together? Against each other?

The propaganda war going on right now is serious. Everyone has known it was there. But often played blind to it.

Thanks to Trump during the last election, and heavy use of the words FAKE NEWS, even the most somnambulent of fools have begun to admit that there is something wrong. That there is a serious concerted effort to drive some very specific messages through the ether and into the hearts and minds of the population at large.

I believe at the time, Trump was simply fighting a battle. For him this could have been the election. Or it could have just been he woke up in the morning and got sick of being lied about.

Once he had them labeled – and all of their heads exploded like an infected pimple – the crazy cadre of left wing “fact checkers” were front and center. The left has often tried to appropriate the term Fake News – confusing the label to their advantage.

But for the Lamestream media, the emperor’s clothes were off. We had forgotten the term “yellow journalism” for all its heyday in year’s past. But now its back. probably never left. But no longer can we look at a piece of news and not ask ourselves who is saying it and what are they trying to accomplish by saying it.

It is fear they are spreading. Enlightenment is the cure. The Alignment of the day – Mercury – Pluto offers us the symbols of fearlessness and bravery.

Now more than ever, we must ask ourselves. What? Why? How? Who? Where? When?

There is more to come. Enlightenment is on the way. We have the Full Moon tomorrow (Or in about 4 hours by my watch since I am writing this a little later into the evening than I had planned. And the Full expression of the Sabian Symbol for the month hits: “Daybreak — the luminescence of dawn in the eastern sky”.

It’s time to see some Daybreak!