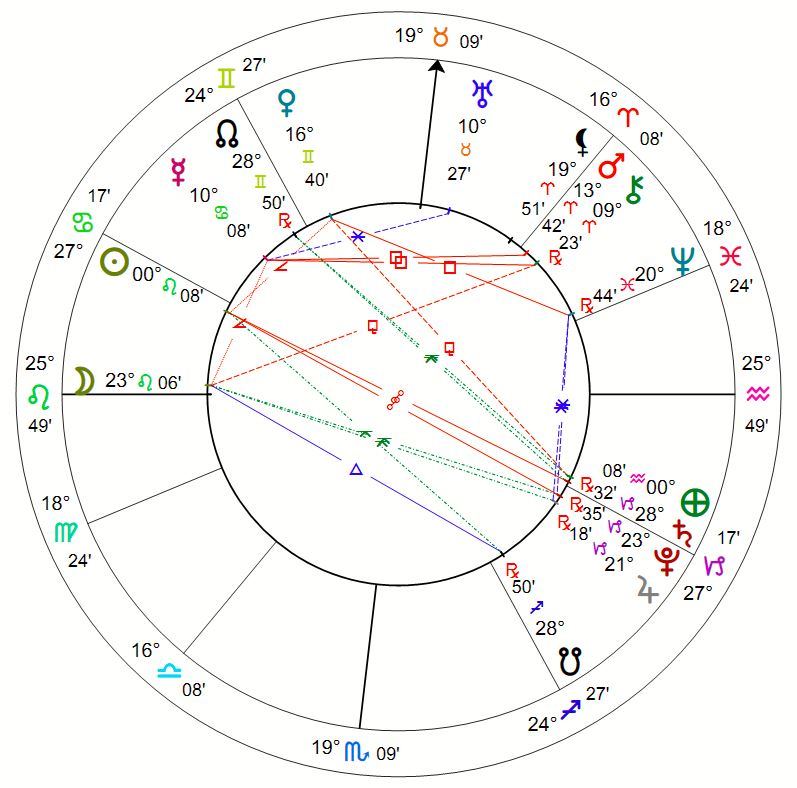 Whose Heads are exploding today?

There is a lot going on right now. Per the Sabian Symbol for the sun, “Under emotional stress blood rushes to a man’s head,” we can guess that things either are, or have the potential to, boil over.

So I want to break some of it down. I am still in the mode I started yesterday. This is Game 1 that I will call: What is its Nature? We have Planetary alignments, Astrology, potential False Flags, and the same old Plandemic and Riots that have been a part of our lives for the past since last fall.

I have been posting planetary alignments that I am repeating from Suspicious0bservers. Sometimes they are obvious from the astrology charts. Sometimes not. Yesterday the Sun, Earth and Saturn were in alignment.  We could see it on the chart as the Earth (Circle with a cross) was at the same location as Saturn (Cross with a hook to the left).

As far as what is going on is the Galaxy, this could be described the same was as a Full Moon – where the earth is in between the sun and (in this case) Saturn.  This puts gravitational and magnetic pull on our planet. Suspicious0bservers watches these due the fact that it increases the chances of large earthquakes.

And What happened? There was a 7.8 Earthquake up in Alaska – in a place called Perryville. It was followed by 5+ point aftershocks in Sand Point, Alaska and Tofino, Canada. This is why we pay attention to these alignments.

An aspect that we pay attention to is the Eris Point – 21 Aries. The Sabian Symbol is A Boxer enters the Ring. It is the point where the planet Eris was discovered about 18 or so years ago. That story is related in Laura Walker’s book about the Planet Eris: Eris: Archetype of Shadows, Crisis & Awakening at the Completion of the Mayan Calendar (2007)

Out of the darkness, a new planet emerges.  Her name is Eris and with her discovery comes the path through the dark apex of patriarchal society.  Eris teaches us the process of breaking free from the grip of a global shadow that has grown to epic proportions and threatens the very core of our personal liberties.  The journey to integrate this shadow strips us of our illusions so that we may balance ourselves and heal our world.   Through it all, Eris, our companion, shines the beacon for rebirth.

We pay attention to Eris aspects because they are strong. They deal with the Shadow side. And Aspects to the planet Eris are histrorically used by the Cabal as attack points. We see mayhem happen at these times.

Today, Jupiter is square the Eris Point. And it also begins the Black Moon transit of the Eris Point (which will last through about August 4). Laura talks about this in a short audio released last night:

At about 8:36 AM on the 22nd, The Sun Enters the sign of Leo, leaving Cancer behind.

Put it together, we can see that we have some interesting times ahead.

Before the energetics for the day hijacked my thoughts, I had already decided what I wanted to write about.  Yesterday we talked about really looking deep into what we see going on. Today, I wanted to start to dissect a subject that has been at the top of the news cycle since late May – Black Lives Matter.

Now a proper discussion of this could take a while. It could probably become a book. I am not going there today.

So today, We look at Black Lives Matter from the lens of Game 2: Follow the Money.

This is a fun game. This is where you look at a subject and try to figure out who is involved based on Who benefits most from its existence.

Now, BLM sound like a completely positive, random uprising of individuals who want to peacefully fight for respect, in the same vein as Reverend Martin Luther King, Jr. And the Lamestream News and every left of center organization love it. We can ignore its seriously passive aggressive challenge to anyone that questions it. I feel it is best referred to as:

The Passive Aggressive Revolution of 2020

They found a martyr in George Floyd. They resurrected another martyr  and New Official national spokesperson in Colin Kapernick. And they plan to ride that wave all the way into November to defeat Donald Trump . . .

What does one have to do with another. Is this an uprising to attain perceived Equal Rights? Or is it the bookend toward a political agenda?

See the video below. Note it is a Facebook video and I do not know if it will play for everybody. I wish you luck because it is a fascinating view of the money and organization behind BLM. After watching this glimpse, then it will be time for a real discussion about WHO might be behind all of this.

If you did not listen to Laura Walker’s audio from last night, she warned about False Flags today. Since it is almost 9:00, what have you seen?