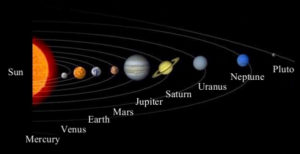 Astrology tells us about the energy that we are experiencing from outside of our home here on Gaia Earth. This includes all of the planets and entities in our solar system, including: Sun, Moon, Mercury, Venus, Mars, Jupiter, Saturn, Uranus, Neptune and Pluto to name the ones that are generally known and talked about in the Mainstream.

When you leave the mainstream, you also contend with Asteroids (Chiron, Juno, Athena to name a few) , The Black Moon and Eris to name a few.

Each of these entities energy fields has an effect upon the Earth. Its Magnetic. Its Gravitational. Its energetic. We feel it sometimes. And often ignore it in the background. And the point of studying Astrology is to Pay Attention to them and be ready for the energy as it is in effect. Your knowledge of it, as well as how to deal with it, is your defense.

Start with The Moon

I begin this study of Astrology focusing on the moon. I listed it as one of the major influences in our solar system mostly as its proximity to us. It is the closest object to us in the solar system. It is by no means the largest. This illustration shows, starting with Earth as the largest, the size of some of the other items in our solar system. Since the Moon is so close, it affects us more than any other entity, other than the Sun.

Let’s put it another way, for people who like numbers:

I have been on a quest to follow more of the natural phases and cycles rather than the man-made cycles. I have felt for a long time that the standard Gregorian Calendar does a terrible job of this. If you are lucky you will find a calendar that has many of these marked. More likely, you have to do it yourself.

I have found many calendars that show basic Lunar phases (usually Full Moon and New Moon). But little else.
A couple years ago I began paying attention to each of the lunar phases and paying attention to how I felt. I had
been following this through Oracle Report for years. Until I began tracking them personally, it was pretty hit and
miss. I would notice at the New Moon and try to keep track. But often lost focus and interest.

When I started watching the dates and the changes, all became different. Paying attention to the energy helped it
to make sense.

There is much that needs to be understood about the Lunar Cycle. The physics can be confusing. So I will step us through it. 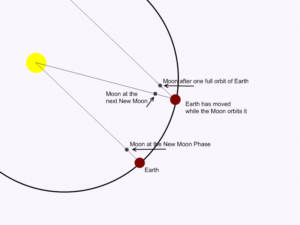 The illustration to the left shows this oddity and may help you to understand it better. Since the earth is moving in its path around the sun, when the moon makes its 29 day circuit, the earth has moved in relation to the sun. Therefore it gets to 360 degrees of rotation, it is not yet New Moon again.

The Moon’s revolution is in sync with its rotation. From our perspective, it is locked. We always view the same side of the moon. You have heard the term “the Dark Side of the moon.” Pink Floyd not withstanding, The Dark side is actually whichever side is not facing the sun. We usually think of it as the side of the moon that we never see.

We however see a constantly changing view of the moon. I found this picture somewhere online and thought it was hilarious. It reminds me of Bazooka Bubble Gum. How cute. Some cigarette company put cool collectible cards in their packs. Now who do you thing they were marketing to?

All jokes aside, it is a cool picture and offers a good example of how we see the moon. 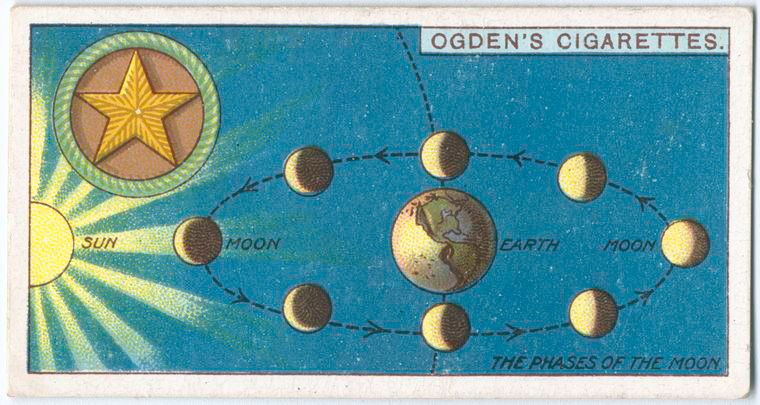 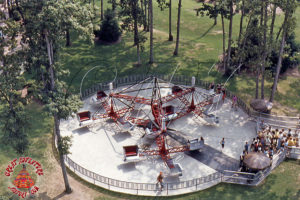 Now you ask, why would there be any difference here as a result of the moon moving around us? I have a pretty good visual to consider that may help you understand the characterizations that we will explain later about the energy at each phase.

Have you ever been to a carnival or amusement park and ridden The Scrambler? It is a common ride. I think it is called the scrambler because after you have ridden on it, the experience can be compared to the way an egg might feel after being scrambled. 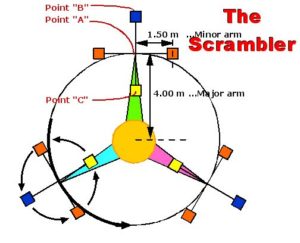 Here is where we can compare ourselves on Earth to the Scrambler. The Earth would be the axis at the end of the long arms. The example has 4 moons, but when you are riding, you get the idea about the forces the Moon is feeling. And for the earth, it is being whipped around in all different ways.

Another thought that you should remember (not in the scrambler example). We on Earth face the gravitational pull of the Moon each time we face the moon. At that time (and then again 12 hours later) we experience its strongest pull. It is so strong that it pulls on the Earth so much that we can see it in the tides (Wow, I made it back to surfing!). It actually creates a bulge in the Earth’s crust.

Here we get to the point of this article. Each lunar phase carries with it a specific energy.I have them listed below, along with their energetic description. For this article series, I will be going through each of the phases and explaining more about that time and the energy that we experience.

Thanks for coming along for the ride.