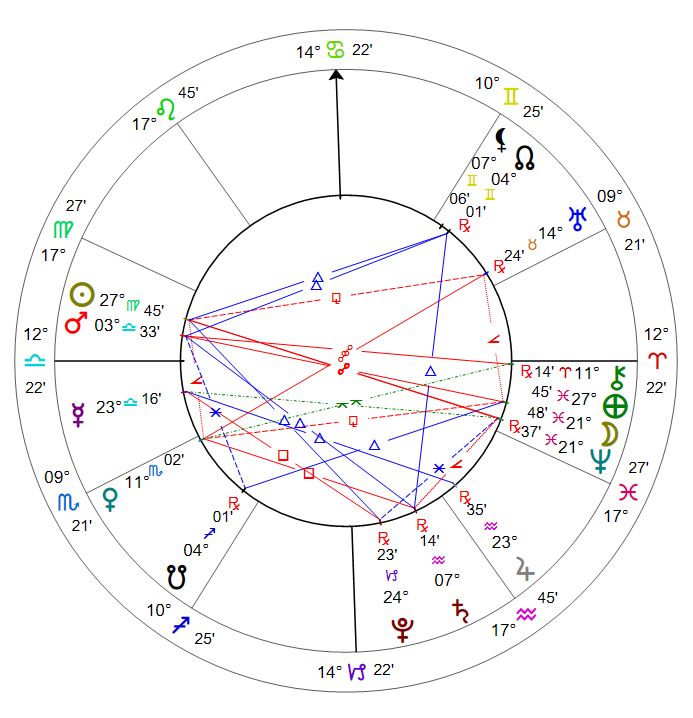 SUN– 28 VIRGO:  A bald-headed man who has seized power

EARTH – 28 PISCES: A fertile garden under the Full Moon

Happy Monday! Wishing you sunny days full of confidence to start your week!

I need some of that Sunny days and confidence. We had a lot going on last weekend and I am sorry for not posting. In addition to being chief gardener here at Astrogardens, we also are raising 5 children here – 2 of which are severely disabled. One is on the autism spectrum – and the best way to describe him is that he is oppositional and defiant. You can figure it out from there.

Then we have our 6yo who has a genetic condition which renders him fully dependent on us. He cannot walk or communicate. We must care for ALL his needs. Part of this had him in the hospital last month for surgery to correct hip dysplasia. He came ou of his casts early in September and finally was able to get back to school. And with that, the school decided he was having seizures – and has become quite triggered about it.

Now part of his condition is severe neurological condition. His brainwave are “abnormal” all the time and he is on anti seizure medication to control it. 4 of them. The school, not understanding the condition and how he is, determined that he was having an episode and administered a “rescue” dose of medication. Per their emergency plan, it meant they called 911 and sent him to the Emergency Room. Happy Friday to me. THANKFULLY it was only Gibbous phase. He was admitted by ambulance and immediately put in a room. 3 hours later when he was released (the hospital saw things more our way than the school’s), the ER was filled to capacity. Was I ever glad to be leaving that scene.

But as a result, we will have to undergo all sorts of testing and general unrest.

The Toll of Entanglements

I have spent countless hours talking around the medical establishment and industry. It leads to the question of how involved or entangled are you within it?

We could discuss the pros and cons of the medical industry, insurance, costs, socialized medicine allopath vs naturopathy. In the end, it comes down to cost and supply and demand. For us here in the United States, It is about what insurance you have, how much you have to pay and what medical professionals you have the option to use within that system.

In a perfect “socialist” system, you would need medical help. You would go to wherever you go to, receive help and walk away all better. How its paid for becomes part of that Governmental Magic Wand. Reality shows that you stand in line, maybe receive the service you need. Maybe you wait longer. But there is no encouragement to speed up the process. And if it is anything that requires more, its a line. If it is more serious, who knows. Obamacare already introduced us to the idea that they may start prioritizing based on age or health or perceived value to society.

Imagine there are 5 people who apply to have treatment for cancer. They can only take 3. Who will they choose? First in line? Healthiest? Youngest? The one with the best credit score? Most favorable voting record on Climate change? Keep asking yourself these questions.

But for my part, we have luckily not come to that. My children, being from the foster care system, receive Medicare/Medicade insurance. It costs us nothing. They pay the doctors . . . something but not much. Doctors do not like the insurance for that reason. Not profitable. So we often have trouble finding doctors and specialists. I would never be able to pay for all that my kids need. That is why the System offers this to all kids who are adopted.

This being said, it also severely limits my choices as far as alternative healthcare. None of it would be covered.

And you can expect that governmental entities have far too much access to the services that the kids receive. If they ever wanted to, the records of my children’s healthcare is accessible to them. Say I have a problem with a certain vax1ne. I choose not to have them get the flu shot. Miss an annual appointment. At what level will THEY get involved?

So this meant that the last few days have been a little busier that I would like them to have been. And I missed a couple days. As this is meant to be a daily report, I have decided to set up the posts (at least the astrological stuff) in advance. That way the info will be there should you want to see it. And additional artical will be added as I write them.

The bummer for me this weekend was that I am sitting on about 8 new articles and haven’t had the time to write them. Rest assured, they will be coming.

Have a Happy Monday and a great week!

Song of the Day – Harvest Moon by Neil Young

Why not. Only happens once a year!