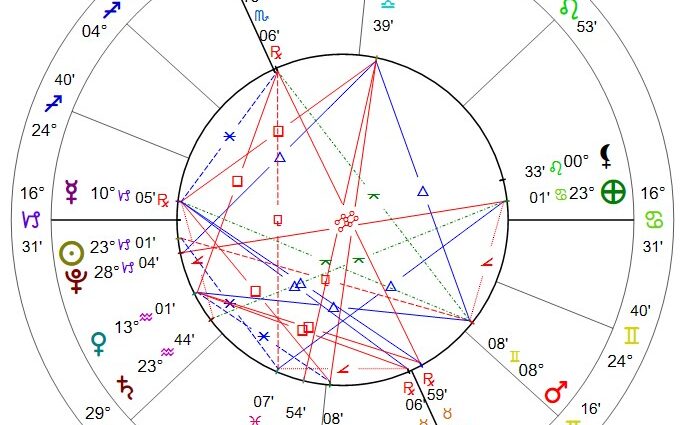 – Aspect of the Aeon Sophia: (Wisdom): – Kali – Goddess of Beginnings and Endings

– Aspect of the Aeon Thelete: (Will/Desire): Seth – God of the North, God of Enlightenment

– Sabian Symbol for the Solar-Lunar Month – New Moon in Capricorn SUN: –   SUN/MOON – 02 CAPRICORN: three stained glass windows in a Gothic church, one damaged by war   (& EARTH: –  02 CANCER: a man on a magic carpet observes vast vistas below him )

EARTH – 24 CANCER: a woman and two men castaways on a small island of the south seas

In a Nutshell (or is that Nutbag?)

I was urged to ask a question of all liberals (Globalists) that I know. The inquiry:

From the time I posed the question to those committed leftists that I know, I have been harrassed and harangued in ways I thought was unbelievable. My favorite was:

“you are nominated for a Disingenuous Online Troll of 2023 Award”

While one of the people I queried admitted that “some” of what was being revealed could be inappropriate and unethical, but that we be up to a congressional investigation to uncover. Wow. After 3 years knowing, this was all they had to say.

This same person claimed that the Democrats in Congress reacted immediately to other scandals amongst their ranks. They comments that Pelosi immediately got rid of Anthony Weiner when things came out about him. SERIOUSLY! His laptop and shenanigans were out in the open for over a year. It wasn;t until the media released a picture of him exposing himself to a minor online that they did anything.

And then there aare the Documents. May favorite and more telling comment seen was from Joy Behar on The View:

‘We all know that Trump is a liar and a thief. We know that. So, it’s not that big a jump to say that he obstructed, and he lied,’ The View co-host Joy Behar said during Tuesday’s show.

She urged people, however, not to jump to those same conclusions with Biden, a Democrat.

‘We don’t think Biden is a liar and a thief, so we give him the benefit of the doubt,’ she said.

And there kids is the nutshell of the mindset of the mainstream toward their own malfeasance. Consider all of Clinton’s affairs, culminating in the Lewinski dress stain. Gary Hart and the Monkey Business? Harvey Weinstein? Jeffrey Epstein? C0v1d? Fauci? Sam Bankman-Fried? The Twitter Files?

The response from the Globalist media is crickets. Mirrored in their supporters – denials and name calling.

It is cliche to bring up comparisons to past horror – like the Nazis. Unfortunately the gameplans have not changed much. When those in power positions have control, they will stop at nothing to keep up the charade. And the way I see it in the here and now, the Globalists have done a yeoman’s job of it.

But we must remember, like the driver of the getaway car, they are as completely culpable for the lies as the people telling them. Is it a small wonder that denizen’s of the left have been trying to erase the Felony Murder charge? hmmmm.

We are living in the fictional worlds we see in the media. Our society is in The Matrix and the people “so inured, so hopelessly dependent on the system, that they will fight to protect it.” So many people are walking the streets of They Live! without the glasses on. Our Government is like 1984’s Big Brother, looking into our lives and changing the past to fit thier present. Organizations like the WEF are implementing a Social Credit system (Just like their testing gruond in China). We are a Brave New World popping drugs to space out and not care.

And those of us who have freed ourselves from the Matrix are the hunted.

Now this is not a post offering a solution to the Cabal. There is none that I know of. We are not going to suddenly red pill the population. Nor are we going to find ourselves with a platform as large and invasive as theirs to broadcast the word. We are relegated to forms of guerilla warfare. Striking and hiding. Joining up with others to do the same. Looking for footholds and gaining what we can.

Our best bets are to 1) Be Prepared – the shit is hitting the fan. Where will you be when it falls apart. 2) Pay attention – knowledge is a weapon. Watch for signs. The media is corrupted. Entertainment is a propaganda weapon. But at times, things slip between the crack. Watch for them. 3) Join like minded people. When the Shit Hits the Fan, you will need a support system. Choose wisely.