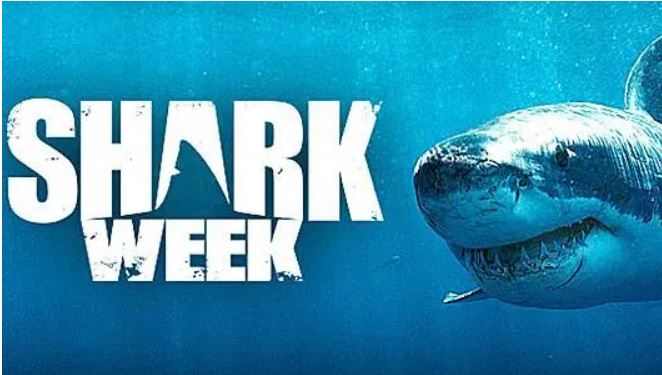 SUN – 27 CANCER: a violent storm in a canyon filled with expensive homes

Over the weekend, I noticed an unusual amount of chatter from the idiot box about shark attacks along the coasts.

You may recall that I do not intentionally watch lamestream news. Rather it is on in the house and tends to affect me much like second hand smoke. Instead of doing the logical thing and turning the F-ing thing off. I try to tune it out. But, like the creature from the black lagoon, it tends to bubble up to the surface of my consciousness.

But anyways, I heard 2-3 different shark attack stories from New York, California and Florida. Hmmm. What might be causing this (other than Climate Change of course)?

Then it hit me as I was walking through the kitchen where my 15 year old autistic son was watching cartoons on cable. There was a commercial announcing that this was SHARK MONTH!

Now What the Fuck is Shark Month?

Admittedly I had to Google this one.

At one point, I think it used to be Shark Week – or the week that the SciFi channel would play all the Jaws movies and throw in a couple Sharknadoes as well.

The Discovery Channel has a Shark Week, which I found out starts on July 24th. Lots and lots of Discoveryesque documentaries.

But Shark Month (or more specifically Sharkfest) is the brain child of the National Geographic Society. And it goes from July 10 until about a month later. In their own words:

The must-see summer event starts on Sunday, July 10. The announcement was made on Twitter on Thursday, just a few days after Discovery Channel announced Shark Week would also kick off in July.

It will premiere on National Geographic and stream on Disney+. SharkFest will continue to highlight the science and cinematic visuals of the apex predators.

Where it all becaomes disgusting is that all the major networks (CBS-owned by Paramount, ABC owned by Disney, and NBC owned by Comcast) are all trying to cash in on the fun. News stories and feartopia will abound in the next few weeks.

This is Just a Little Primer on How It’s Done

Let’s face it. The Lamestream is looking for ANYTHING to distract the good people of the world from what is gong on in the world. What you can expect to see will include:

The horrors of the Right Wing Supreme Court ruling on Roe vs Wade and how that was caused by Racism and Climate Change.

They will add in Climate Change Hot Weather stories (because it supports the already planned narrative) and anything that the Democrats and January 6th committee deem relevant.

What you will not hear about:

The Bumbling of our Puppet-President

We are in the Summer before an election where the ruling party in power is going to get shellacked due to hubris of their destructinve, globalist policies. And the media does not want the Public to think about it.

Pay Attention. It all adds up