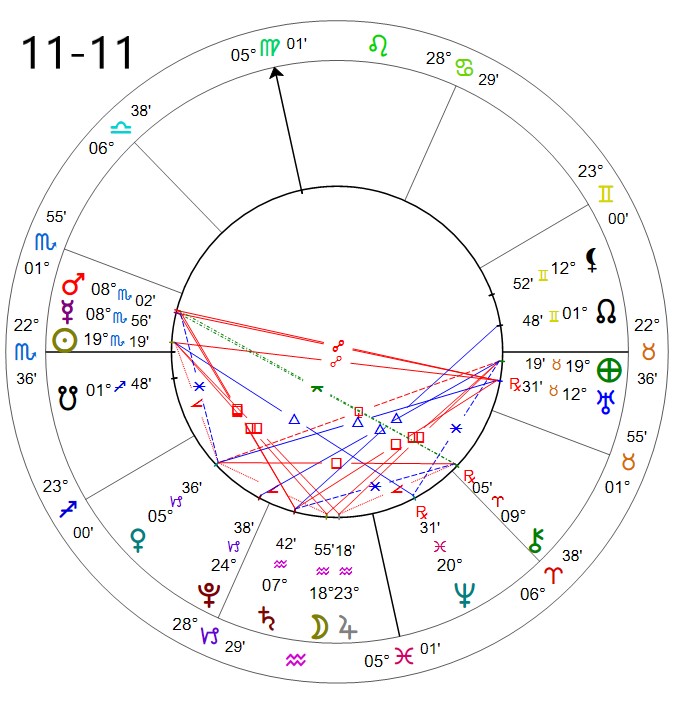 – Planting Calendar (from the Farmer’s Almanac) –  November 9th – 11th – A good time to kill plant pests or do plowing. Poor for planting.

SUN – 20 SCORPIO: a woman drawing aside to dark curtains that closed the entrance to a sacred pathway

EARTH– 20 TAURUS: wisps of clouds, like wings, are streaming across the sky

I received an interesting and telling message in my inbox regarding Squid Game:

Have any readers watched the Korean Netflix program called Squid Game? It’s a macabre look at what people pushed to extreme fear will do to themselves, and those around them.  Greed, wealth, poor choices, hubris and both bankrupt financial accounts and morals. It casts a harsh light on avarice, the lust for wealth, and the depths to which humans will stoop even if it means killing other humans.  There are also moments of kindness, care, altruism. It’s an emotional rollercoaster of a program.

The first of the five childhood games (that have been violently warped beyond recognition)  played is “Red Light Green Light.” In Squid Game, if you are caught moving, you are eliminated – by a rifle shot to the head. And the piggy bank starts filling with money – the last player – man or woman – standing will take it all.

This week began the US version of  “Kid Game.” The White House reports that some 900,000 children got their first Pf1zer dose in one week.  Our own CDC just gave the green light to the brand new Pf1zer C0v1d vaxcine for children as young as five. Parents are rushing across the field with their children, many desperate to get their kids that first dose.  Like so many of us, years ago, they are acting out of fear, habit, rote acceptance and love for their kids.  I saw one Social Media screenshot where a Mom was crowing that she had just forged her daughter’s birth certificate so she had just turned 5, not 4.  Maybe it’s true, desperate parents will do anything to protect their children, yes?  Especially when plunged into extreme fear. If the side effects start pouring in, heart problems, will that finally open the eyes and at LEAST begin acceptance of a yellow light?

“Let me explain the directions again…..” This simple line is  recited as each game is described in Squid Game, by a pleasant female voice.  But now? I hear it in Anthony Fauci’s gravel pit voice.   Fauci has explained the directions – vax or be eliminated.  Play the game. The Kid Game.

Now, I have not watched Squid Game at this point. Seems like an interesting take on a theme I have talked about in the past. I first remember if from Stephen King (writing under the pseudonym Richard Bachman). The Story – The Running Man. It was made into a terrible movie starring Arnold Schwartzeneggar. In this dystopian future, Television Game Shows had taken a Dark turn – allowing people to put up their lives and bodies for a chance to make money. In the Bachman story, it was more about giving the little guy a chance to make it up from extreme poverty – all for a little entertainment. It was the little guy against the big rich society.

I have often commented that I believed that what Stephen King envisioned is far too close to what we see today with Reality Television. In Survivor, people starving and competing against each other. Winner take all. And while it is on camera  and made for television. The players are not people killing each other. But the competition remains similar. And a lot of what fascinates me about watching some of these shows is seeing that these competitions evoke in the players.

The scripted Squid Game shows it all to you. It shows you the depths of the human soul. And it has been pointed out that there seems to be a very specific agenda and message in the story. And given that it is Netflix, the message comports to a future brought to you by the NWO.

Which brings us back to The Kid Game. And everything being brought to us by the NWO and those in control in Washington and above. As far as c0v1d waxinations for kids, could we have expected anything less? I believe that the threats of mandates being forced out right now were the warning that the people in the government no longer acknowledge personal sovereignty in the US. We are not the land of the free in their eyes. We are “the governed.” We have a place in their world. And that place is as smiling happy prisoners. And they have the NWO media marshalling them and us along for the ride. Lemmings toward a cliff.

And You Wonder How Deep Does it Get

The School System – I live in what is considered to be a very good school district. They rank at the top of the state and have often ranked nationally. Though from our perspective, this does not mean a lot. Of out 10 children, 7 have gone through school with IEP’s due to learning disabilities. A school’s record for matriculating kids to to college and universities means very little to a kid who is just trying to get through government mandated school. Consider this also. In the last 10 years:

We see what they are trying to accomplish through workplace vaxs mandates. How far away will we be now that they have approved the wax for kids?

More than at any time in my life I am looking seriously at ways to protect my family and my way of life. Ask yourself the question about all the ways They have you tied to their world.

I have railed on the subject of the Chinese government’s use of social controls. There is the Social Credit System. There is Government control of the entire economy. There is government control of ALL industry. There are reeducation camps when you do not agree with the government. We hear about these things and almost laugh as they are examples we expect from dystopian horror stories. And far too many people, when they hear about them, choose to not really believe it. When it comes to China, I simply ask you to remember Tank Man. Ask yourself where he is now. Consider Jack Ma (the former CEO of Alibaba). Heard from him recently? I think not.

Ask yourself if there is an escape plan here. Have you considered where you fit in all of this? Can you continue living in the middle of this lie? Will you fight? Will you disappear?