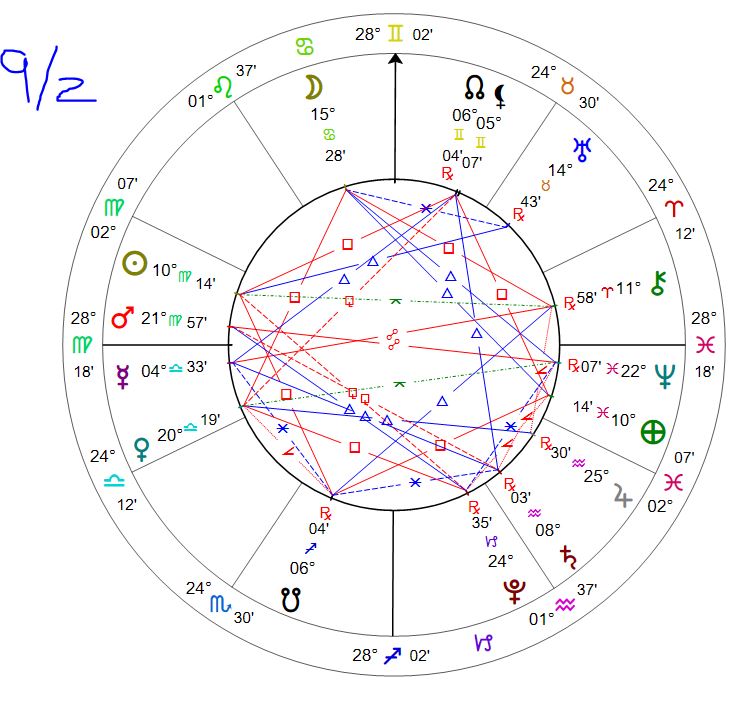 – Sabian Symbol for the Solar-Lunar Month – New Moon in Leo: “A volunteer church choir makes a social event of rehearsal” (& “A watchdog standing guard protecting his master and his possessions”)

SUN – 11 VIRGO: A boy molded in his mother’s aspirations for him

Nature runs its course and sometimes we are in its path. This is what disaster and catastrophism is all about. We get Earthquakes, Volcanoes, Polar Vortexes, Wildfires, Hurricanes and Tornadoes on a far too regular basis here in the US. Choose your corner of this big blue marble you are on. There will be some form of catastrophe that can hit.

And when it does, the question you must ask is, Are You Prepared?

Everyone in the path of Hurricane Ida is asking themselves that today? She came up through Louisiana, Alabama, Tennessee. Up the Blue Ridge into Virginia, Maryland, Delaware, Pennsylvania, New Jersey and New York. Then through new England.

For us in Pennsylvania, 1220 miles from landfall in the gulf and we had a day of 10+ inches of rain plus tornadoes. Who plans for that?

I think that luckily, after Katrina 16 years ago, New Orleans was better prepared than they were. Damage and destruction, Yes. But weeks and months of bedlam and cleanup? Not so much. The shit has not hit the fan. Society has not come to an end. No riots like a year ago after George Floyd. People and society knew what to do here. Save what can be saved. Clean up the rest and rebuild what must be rebuilt.

11 tears ago, the Mid Atlantic was hit by Hurricane Sandy. The Jersey Shore was less prepared than they were now. Lessons are learned.

My neighborhood? Just 10 + inches of rain. Some local flooding. There may have been power outages. Not here though. Roof didn’t leak. Basement dry.  My garden . . . got wet. It was a yawn.

The Importance of Preparation

While I was personally not impacted, our daughter has a friend that was evacuated by the Red Cross. One of those neighborhoods that needs to seriously consider their Flood Insurance and whether it is needed. The same river that has Philadelphia under water runs through our town. Previous disasters taught people to move to higher ground. In 1973, Hurricane Agnes did exactly that. I of course was 6 years old and live 3000 miles away in Whittier, CA.

We were lucky this time.

Society has not fallen apart. There seems to be no widespread looting. No crowds of angry people storming the local Targets and throwing Molotov cocktails and bottles of urine. Instead, people are working together. This is the shit not hitting the fan.

But it reminds us all about Paying Attention. Consider where you would be if that tornado ripped through your house. What would happen if the flood washed over your house and left you stranded on the 2nd floor. Where would you be?

Frankly the one thing I saw as a positive was that local news preempted The CBS Early Show and I did not have to listen to that troll Gayle King virtue signal about climate change all morning.

You do not have to become a full on Davey Crockett style prepper. It is important that you at least have some basic plans made in the case of disaster. Like we say over the winter, no one should be in a position that they have to make trips out for milk and bread before every snow storm.

Consider what you need. If you are going to shelter in place, do you have supplies. If you have to bug out, do you have a bag or a list of things you must have? Basic preparation. We had time to know about the rain. If it had been the tornado, it may not have been so easy.

And For Your Viewing Pleasure

If it is not Mother Nature trying to bring us down, it is our own Government. You have heard about this kind of stuff happening. Now you can see it. Or see how long it takes for YooToob figure out that I posted it and take my channel down again!