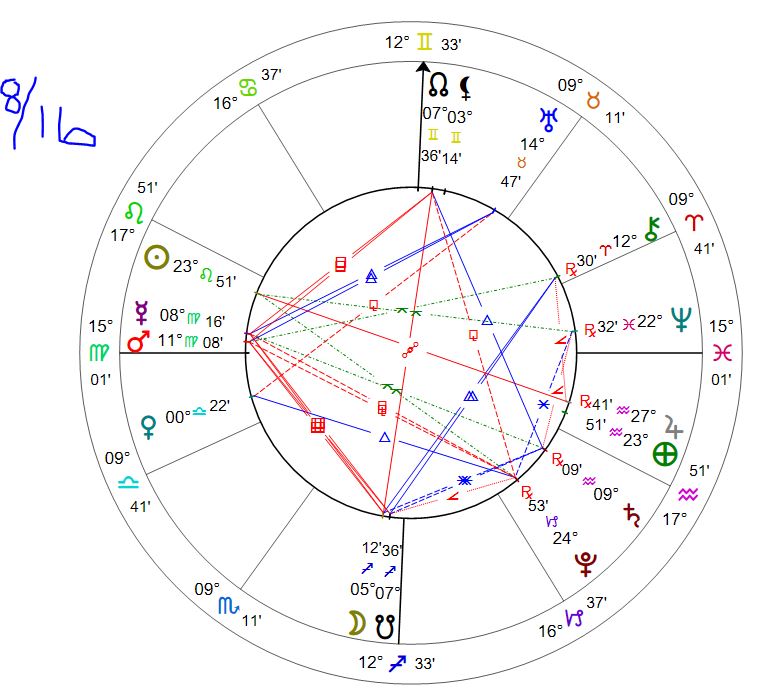 – Black Moon Days – Opposing the Moon – Aug 15-18 – Note the Black moon is in conjunction with the nodes as well.

– Planting Calendar (from the Farmer’s Almanac) –  August 15th – 17th – Cut winter wood, do clearing and plowing, but no planting.

SUN – 24 LEO: Totally concentrated upon inner spiritual attainment, a man is sitting in a state of complete neglect of his body

EARTH – 24 AQUARIUS: A man turning his back on his passions, teaches deep wisdom from his experience

Happy Monday! Always remember, you have within you the strength, the patience, and the passion to reach for the stars to change the world. – Harriet Tubman

I recently saw a meme about Nikola Tesla. It used the frightening picture of Nikola when he was old. It lamented about how unfair the Capitalist system was that the most brilliant man on earth could die penniless (I have more than a few leftist friends on Facebook and see a lot of their propaganda).

That being said, you really have to think about how this could happen. Nikola Tesla dreamed up AC power. You know. The stuff that comes out of the wall socket throughout the entire world. I found the Top 10 list of his inventions:

And you may ask, How could someone who was such a brilliant physicist become a failure financially? I bring this up to make some simple comparisons and take exception to the question poised about Capitalism vs Socialism.

While we are talking about the most amazing minds and inventors, also look at Albert Einstein. Einstein was a German-born theoretical physicist. His net worth equal to $65 thousand When he died in 1955. That’s the same as around $634,000 in today’s dollars after adjusting for inflation. He is one of the most influential scientists in history, known for developing both the theory of relativity and the equation E=MC2. In 1921, he won the Nobel Prize in Physics for innovations in the field of quantum physics.

Einstein enjoyed a relatively modest net worth during his lifetime compared to his level of fame and importance to mankind. He was actually quite poor throughout his career. In death, he is perennially one of the highest-paid dead celebrities. Thanks largely to the licensing of his name and likeness, primary on the “Baby Einstein” product line, royalties for Einstein’s beneficiary’s earn millions per year. The royalties from Baby Einstein alone have been known top $10 – 20 million per year.

Thomas A. Edison , an inventive genius but also a shrewd entrepreneur, was a founder of what became the General Electric Co. At his death in 1931 he left a $12 million estate, big enough to have put him on The FORBES 400 list. This is the man who was once the employer of Nikola Tesla and then spent most of his life trying to steal or discredit Tesla’s Inventions.

I bring these Fellows up in the context of some of the things going on today. They were 3 of the most brilliant and powerful minds alive. The influence of their discoveries affect our lives today 65-140 years later. And what they created was . . . Infrastructure. They created the dominant power systems that give us our reality today.

Notice also that despite their personal politics, the systems that were created were NOT under a publicly controlled command economy (Socialism). And they drove

Consider the Driver’s of Innovation today

I will name a few. Steve Jobs – inventor and marketer of Apple and Pixar. Personal Computing, Cell Phones and Entertainment. Bill Gates – founder of Microsoft software – the dominant computer operating system for the last 30 years and promoter of vaxines and eugenics programs around the world. Elon Musk designer of electric vehicles and commercial rocketry.  These innovations are part of the infrastructure of our lives today.

I would first point out that under “Socialism,” these ideas would probably NEVER get off the ground. A Socialist system rewards anonymity and conformity. And Conformity does not lend itself to innovation. There is no profit motive that would drive the demand for cell phones and personal computers in a world where people are suppose to strive for a common good rather than individual pursuits.

These ideas have rocketed society into a technological future that could not have been imagined 150 years ago. And while the capitalist system does not expressly have a goal of elevating the lives of everyone in society (equally), the results in brings to individuals results in exactly that improvement in society.

I ask everyone to brainstorm now the advances to society that have been created by Collectivist societies. Please leave them in the comments.