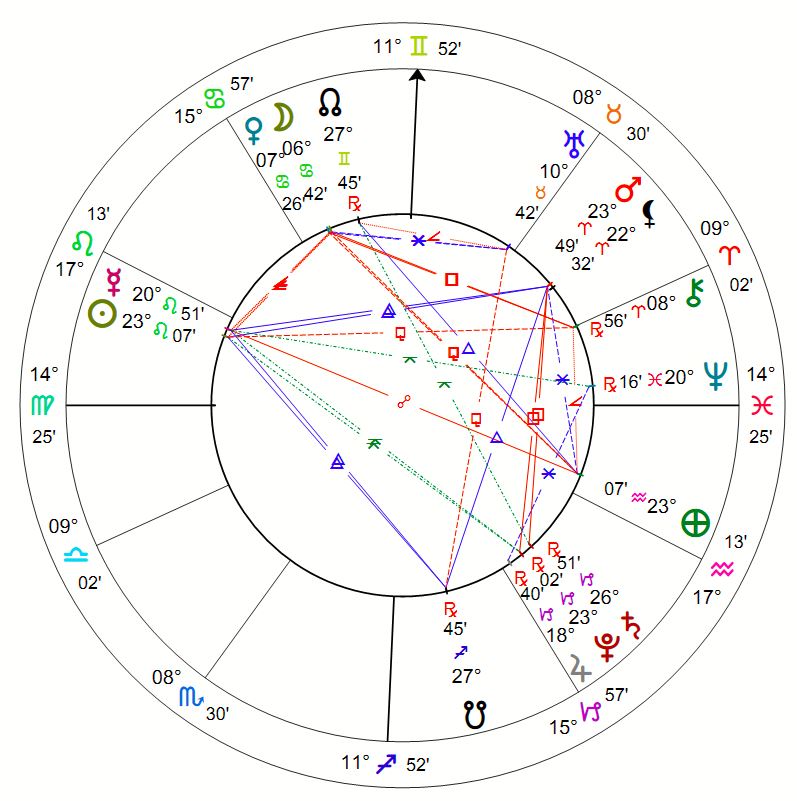 – Mars is Square to Pluto through August 15th

SUN:  24 LEO: Totally concentrated upon inner spiritual attainment, a man is sitting in a state of
complete neglect of his body

EARTH:  24 AQUARIUS: A man turning his back on his passions, teaches deep wisdom from his
experience

What might CS Lewis say of our new COVID19 situation?

Here’s what he said in 1948 about the mental shift required by living with the threat of the atomic bomb:

In other words, do not let us begin by exaggerating the novelty of our situation. Believe me, dear sir or madam, you and all whom you love were already sentenced to death before the atomic bomb was invented: and quite a high percentage of us were going to die in unpleasant ways. We had, indeed, one very great advantage over our ancestors—anesthetics; but we have that still.  It is perfectly ridiculous to go about whimpering and drawing long faces because the scientists have added one more chance of painful and premature death to a world which already bristled with such chances and in which death itself was not a chance at all, but a certainty.

This is the first point to be made: and the first action to be taken is to pull ourselves together. If we are all going to be destroyed by an atomic bomb, let that bomb when it comes find us doing sensible and human things—praying, working, teaching, reading, listening to music, bathing the children, playing tennis, chatting to our friends over a pint and a game of darts—not huddled together like frightened sheep and thinking about bombs. They may break our bodies (a microbe can do that) but they need not dominate our minds.”
— “On Living in an Atomic Age” (1948)

I found this great piece by CS Lewis (of Narnia and Screwtape fame)  on Facebook and wanted to share it here. It felt like the same kind of wisdom expressed in the Sabians today – philosophical musings. But timely in a number of ways.

FIRST – COVID 19. Ehough said. The piece spoke directly to the fear that has been foisted upon us through this global plandemic. Reread that third paragraph a few times

SECOND – I have finally finished a long book series that has been taking a lot of my time over the last 8 months. It was the 14 Book epic Wheel of Time by Robert Jordan. Though it has its ups and downs, fight between light and darkness. It is at its heart just a 10,000 + page story about a group of teenagers who save the world with light triumphing over darkness, with magic. It was fun and it was the second time I have read it. This time I listened to it on Audible so I could listen in the car and while doing the dishes and the like. But it was fun and time consuming.

Now that it is done, I am on to bigger and better things? No just other things. So I wanted to get into anther book series. It would be one of two. I allowed my wife to choose randomly either A or B. She chose A, which meant HARRY POTTER! And where Wheel of Time was mostly just edge of your seat fun and amazing battle sequences, Potter offers me opportunities for insightful thoughts and Commentary.

THIRD – Defense Against the Dark Arts – A year or so ago, I wrote a series of articles on the subject of The Dark Arts. Examples directly from the Harry Potter – and then relating them to life here on Earth. In scrolling through my draft articles, I found 5 articles that I never finished, that I will resurrect. Also I have a list of other fun topics to cover.

If you are interested, the DADA articles are all still here on Astrogardens.com. Just click the DADA tab at the top to find them.