September has been declared National Preparedness Month by the US government. This observance is sponsored by FEMA, and is annually renewed by the President like all of the other super important Observance days and months, like National Ice Cream Day and National Donut Day. So many of these things are put together for congresspeople to justify their existences and say that they have actually sponsored a bill.

While I am poking fun at government programs, I see some value to this, though in a squeemish sort of way, which I will get into in a minute. 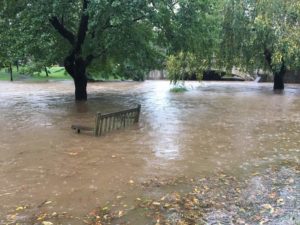 For us here in Eastern PA, FEMA had some work to do. And this work bears upon the whole idea of being prepared. Note that these pictures were ones I borrowed from the local paper. But in my travels, I passed each of these spots and witnessed this.

Yesterday, August 31, we got some more rain. About 5 inches of rain in about 3 hours. These storms have been hitting this area over this summer. Sometimes 10 miles away and they miss us completely. Other times we just get a part. For us, this was our direct hit day. 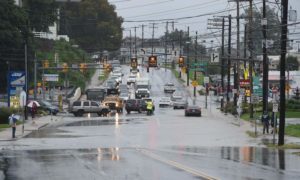 I was out driving my kids around through the hardest part of the storm. Spent a lot of time driving around flooded roads and behind slower, more cautious drivers. I saw cars deluged on the side of roads, streets flooded, drains clogged, streams over flowing their banks. It was a whole lot of water.

The hardest hit area is called “Sinking Springs.” It’s known for being lowlands, prone to flooding and sink holes.

We received a call in the middle of it from our Daughter in law, crying that her basement was flooding. When I got there, it had reached about 6 inches of water. My assessment was that the sewers had filled and were pushing up into all the homes. After about a 1/2 hour of squeegeeing water into the sump pump, all was better. Luckily they had not 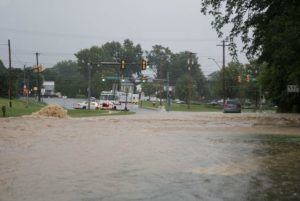 gotten around to finishing the basement, so the worst of it was the boxes of Christmas decorations getting wet and an old throw rug.

Many of the other neighbors were not so lucky, and will spend the rest of the holiday drying out their lives.

One of the Newspaper articles noted that the Western Berks Emergency management department would be working on these issues this morning. Since that department consists of one person (My next door neighbor who I named McGreggor in an earlier post) busy is right.

And What the Hell does all this and FEMA Mean about Prepping and Gardening?

The idea of preparing yourselves, is to be ready in case something happens.  When you experience these things, you are reminded of the things you might need and do not have.

Communication: One of the victims of the storm has been the cell phone network. Apparently a T-Mobile substation got flooded out. It rendered about half the cell phones in the area useless (mine included). It works sometimes, and by now may be on. But for about 24 hours, people could not communicate. Power stayed on though.But for a while, people could not get ahold of me.

Food and Water – Not something we had to worry about. We went out the the store and had no problems.

Batteries for flashlights? We needed a flashlight going down into the basement. Had to see if it was safe to walk through. There was one flashlight that only kind of worked. We used cell phone lights. But again, it wasn’t long. A few years ago, our power went out for 24  hours during a snow storm. We had to break out candles and run out to Walmart for touch lights.

As for FEMA, you do not hear much about them unless you know Police of Fire workers (I know both) or follow conspiracy theories. For Police and Fire, FEMA is just another link in the network. They sneak around and do funny things – usually helping the police by doing the time consuming paperwork involved in accidents and disaster.

For the rest of us (at least me), they scare me. Why? Because FEMA are the agents of the government that can enact Martial Law in the case of an emergency. And anyone with that power, scares me. especially when he is my next door neighbor who barely speaks to me. I am not expecting much help from him if the shit hits the fan. We will be on our own. But should the Shit Hit the Fan, consider how much help the authorities will be for you in your life and how much you need to be ready for whatever might happen.

So back to preparedness Month. I will offer you the basic statement from EPA.gov

Each September, National Preparedness Month encourages and reminds Americans to be prepared for disasters or emergencies in their homes, businesses, and communities.

Homeowners, families, communities, and businesses can use this opportunity to find ways or help others understand more about preparing for disasters and reducing risks to health and the environment. There are many ways to reduce risks from contamination, leaks, spills, hazardous materials, and other dangers. This page doesn’t include all possible ways of preparing but provides many ideas and links to more information. SEE THE REST BY CLICKING HERE

And there is a surprising amount of good information on this site and a myriad of other government sites (Your tax dollars at work). Its like a bunch of online pamphlets with decent practical advice. I will share more of it later. Funny thing is that most of the advice they offer is the same kind of things that you find on prepper site. But it has a government spin on it. Like, “Do this and then call the authorities.” Its up to you whether you want to rely on government or rely on your self.