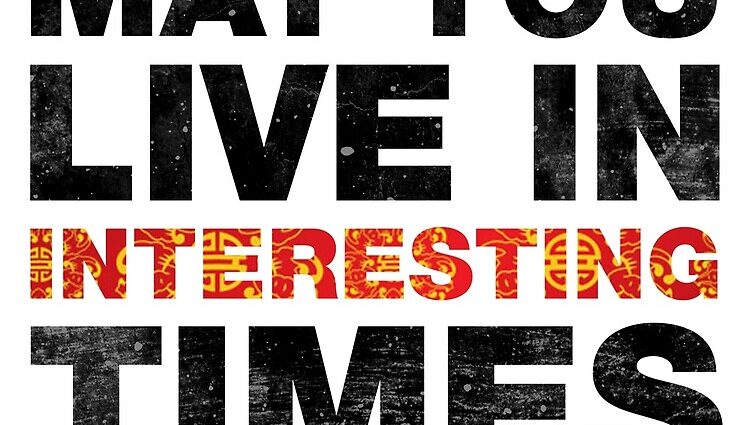 Be Careful What you Wish For

Have you ever heard of the 3 famous Chinese Curses?

The irony of these 3 curses is that, on the surface, they can seem like blessings.

And if you look it them up on Snopes or any of the fact checker site, they will likely tell you these are not “Chinese” at all and that they were actually written in America. Fuck them. I like the “chinese” story better.

Another of these “chinese curses” that can often be found on Google or in a random meme is:

And this is the one I would like to talk about. It is the “curse” that seems like a blessing. And particularly in Chinese culture – the one that came before the Communists.

Back in that day, it was Confuscism that consumed the lives of the Chinese people. And in it, family ties and family roles were most important. In fact these ties and roles formed the basis of all life in China. Until the Communists of course.

So the Blessing-Curse – a Child who becomes an artist will create wornderful artwork . . . but will be broke as being an artist gives little chance of monetary success. And in Chinese society, it was the responsibility of the children to care for the parents in their old age. And a child artists who is broke and destitute . . . You get the idea.

In the Communist/Socialist world, there is a world for artists to become great. The “system” will find them and cultivate them. Of course how much this has to do with natural talent of one’s choices in life may have nothing to do with where a person goes in Communist life.

How many Mozarts or Rachmininoffs have become street sweepers or can stampers or fish mongers as that was what the system told them to be? That being said, iun a pluralist society, how many of the same genius’s also did not find their way to musical success and ended up waiting tables or working at McDonalds?

Ask yourself nowadays how someone makes a successful life out of the Arts. Where do they come from? How do they percolate to the top?

Let’s take media darling Taylor Swift for example. I can do this as her humble beginnings were in this same small town I live in. Young Taylor was one grade lower than my oldest son.

Did he know her? Not really. She was friends with the two girls down the street. Still knows and communicates with them in fact.

How did she start? Guitar lessons. And a burning desire to sing. How exactly she decided on Country Western, being from suburban Pennsylvania is anyone’s guess. We always suspected it guided by her parents who could see opportunities in that direction. Now she is worth over half a billion dollars.

And consder where it has gotten her. It’s a hard life growing up in the limelight. The lights rarely go off. There is always an audience watching. But she does have that half a billion.

Even closer to home is my own life. The only musical instrument I can play is a radio or a CD player. However my youngest daughter was blessed with musical talent. We saw it as a fire inside. We did our best to stoke the flames. But never pushed her. The moves she has made were her own.

She saw a vision of what she wanted in life. And one of those things was college. Our family, with 10 kids, was not in the market for an expensive college tuition bill. She would have to earn it on her own. She does not see a future as a performer. But is interested in the music inductry. And what better way to get there than to leverage her talent. And it won her a full ride to the school of her choice.

Be careful what you wish for.

Another Example to Consider

Last week I talked about Sol Luckman’s book Cali the Destroyer. The story follows a main character who is that Starlet. Matriculated to the top of a controlled dystopian future. Is she in control of her carreer? Is she a pawn of the apparatchik of the day?

How much of the lives of the rich and famous are controlled? Ask youself. Do you have any idea?

An interesting take on this was in the Muppet Movie. The muppets traveled acros the country to become rich and famous. And sitting at the desk of the big Hollywood executive (played by Orson Wells), they are offered the “Rich and Famous Contract.” All the riches in the world. But what’s the cost?

Someone is going to make money. Do you really think it is the Artist?

I guess it brings us back to the original curses: