EARTH– 14 TAURUS: on the beach children play while shell fish grope at the edge of the water

I AM NOT OK WITH THIS!

The big headline in the news for the past 24 hours has been about the January 4th deadline set by the Person Acting in the Office of the President. The Great Vacx1ne Mandate.

My last reading of the Bill of Rights of the United States of America makes me thing that NO, the Federal Government cannot do this. And ANY and EVERY American should all be saying the same.

Do you know what governments around the world have the “right” to demand and force such a thing on its people? I will name a few:

But that is not all. In fact, I would venture to guess that a large majority of the government around the world have the “right” to make such demands. Why you might ask? Because very few, if any for that matter, explicitly state it its Constitution or founding documents that the people/citizens of the nation:

“We hold these truths to be self-evident, that all men are created equal, that they are endowed by their Creator with certain unalienable Rights, that among these are Life, Liberty and the pursuit of Happiness.”

So how many people think that a country with this statement in its Constitution would have a government “Mandating” and demanding that its citizens receive 2 vaccinations as well as boosters when they feel like shaming you into them. The level of psychosis we are seeing here is off the charts. Your choice about whether or not to take the jab is your own. And to tell me that if I refuse it I will have to receive counseling from experts to help me understand why I should (yes I heard those words on the news). That employers must require the vax or else require weekly tests at the victim’s expense. That fines will be imposed on the companies and the citizens for refusing the jab. THIS IS NOT AMERICA. 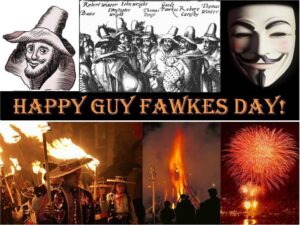 On to A More Interesting Topic

In my desire to remind people of things going on in the world that we may not have heard about. November 5th is Guy Fawkes Day. I was reminded of this by a Welsh friend of mine who commented about watching Fireworks. So I thought to myself, why would someone be watching fireworks on November 5th. And then I remember this little British Celebration. As stated on wikipedia:

Guy Fawkes Night, also known as Guy Fawkes Day, Bonfire Night, Fireworks Night (and my favorite Gunpowder Treason Day), is an annual commemoration observed on 5 November, primarily in the United Kingdom. Its history begins with the events of 5 November 1605 O.S., when Guy Fawkes, a member of the Gunpowder Plot, was arrested while guarding explosives the plotters had placed beneath the House of Lords. Celebrating the fact that King James I had survived the attempt on his life, people lit bonfires around London; and months later, the introduction of the Observance of 5th November Act enforced an annual public day of thanksgiving for the plot’s failure.

I also particularly enjoy the Anonymous facemask that is representative of the day. So, Happy Guy Fawkes Day!