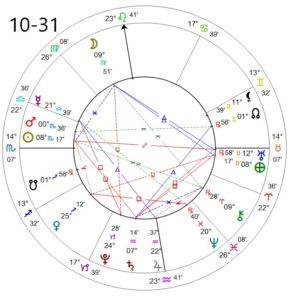 – Planting Calendar (from the Farmer’s Almanac) –  October 30th – 31st –A most barren period, best for killing plant pests or doing chores around the farm.
– Aspect of the Aeon Sophia: (Wisdom): Bhairavi (The Goddess who fortifies the heart)

08 SCORPIO: the Moon shining across a lake
09 SCORPIO: a dentist at work

08 TAURUS: a sleigh without snow
09 TAURUS: a Christmas tree decorated

Or is that Samhain? So what exactly is Samhain? This is from Calendarpedia . . . though I think it was partially taken from wikipedia. Check them both if you’d like.

Samhain is an ancient Celtic seasonal festival to mark the end of the harvest and to remember the dead. It is celebrated from sunset on October 31 to sunset on November 1. It is held at the time of year when the boundary between this world and the world of the dead is considered to be at its thinnest and can most easily be crossed, and the souls of the dead return to the world of the living for one night to revisit their homes and seek hospitality. It is thus related to (and conincides with) the Christian celebrations of Hallowtide: Halloween (All Saints’ Eve) on October 31, All Saints’ Day on November 1 and All Souls’ Day on November 2. It also coincides with the Mexican festival Day of the Dead. 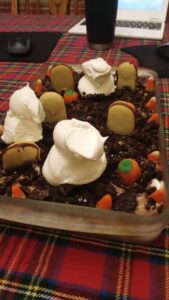 I do not know. I do not celebrate it. But we do celebrate the American Holiday of Halloween. The kids go Trick or Treating. We prepare fun Halloween themed food (think Chicken fingers with BBQ sauce for blood or Ghosts in the Graveyard pudding. And eat way too much Halloween Candy. Good Clean fun.

I bring it up this year because of the experience I had tonight taking my 15 year old son out door to door. You may say, why did you have to walk with your 15 year old? Well, that’s because of Autism.

Our son Aaron is high functioning Autistic. Means he can talk and communicate pretty well. Speaking was never really his issue. He started that a little slow. But by 3-4 cold say words and sentences. It was always more what he said or didn’t say that was the issue. He has a significant Processing Delay . . . meaning that what takes a person usually a second or two to understand can take him up to 15 seconds. He has ADHD. It’s not debilitating, but you sure do not want to be around him unmedicated. He’s complicated. And let’s just say that his social maturity level does not match his age.

Well Halloween has been on his mind for quite a while. Months in fact. What was he going to do about Trick or Treating? Who would go with him? What costume would he get? Did he have a flashlight? Would he be able to go costume shopping?  The list of questions from an Obsessive Compulsive is endless.

And what do we as parents do when we know that very little of what he is hoping for will be possible?

Take shopping for a costume. He did not have a clear idea of what he wanted to be. And frankly I had no desire to buy another stupid, overpriced Halloween costume. Luckily for me, his older sister agreed to take him. He came home with a Blanket that said The Exorcist and a plastic knife. I know he also had his eye on a voodoo doll. None of it appropriate for a costume. A short trip to the basement storeroom found us an old Scream costume that he agreed to.

Then there was Trick or Treating. He had his heart set on going with his older sisters. Unfortunately they had had their fill and refused him. And after a lot of yelling and false starts, I had to take him around the neighborhood.

And it was good that I did. I found out after the first house that our real issue was Social Anxiety. He could not deal with facing someone at a door, saying “Trick or Treat” and then thanking them for the treat. At home in his own element, he won’t shut up. Each house was an ordeal. I had to walk him through it. Mentally prepare him. Remind him to speak. And this is a 5’10”, 130 lb kid. Not completely unheard of seeing teenagers in our neighborhood. But between seeing a parent on the sidewalk and an ill fitting, rag-tag costume and mumbles for greetings, most of them figured it out.

And Blessings to all out there who are able to see us as we venture out in the world. The help you give us cannot be measured. 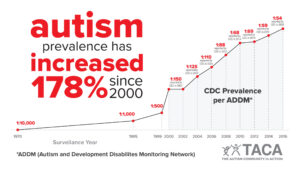 They say that 1 in every 54 boys and 1 in every 145 girls is on the Autism Spectrum today.  But that has not always been the case. Here I am going to post a chart. There are thousands like it. The data comes from the CDC. And what they will admit about it is that:

1- It is not a “genetic” Condition

2- These figure do not represent skew from better diagnostics

As a parent of an Autistic kid, I say believe whatever you want. An epidemic like this does not get swept under the rug and ignored. That is, unless they already know exactly what the cause of it and have accepted it as an “acceptable error” in the data.

I plan to talk more about this in the future. Being quiet about it is just not sitting right with me.

Back Home For the Night

After a block and a half, Aaron saw that he had what he thought was an acceptable haul of treats. He had stopped crying be the time we got to our house. And sitting on the couch counting his treasure, he perked up and you would have thought he had gone out for hours. For us, another day and another holiday managed.

The casualty? Our wits. Our patience. Our ability to cope. Our worries. Our hopes. Our Dreams.

There is no magic pill for the Autism spectrum. Or any ability to study it. Any chance to openly discuss it without being labeled a quack or a conspiracy theorist.

I am going to keep talking. I invite all of you to be part of the conversation.