SUN – 03 SCORPIO: Neighbors help in a house raising party in a small village

EARTH– 03 TAURUS: Steps up to a lawn blooming with clover

Happy Monday! “There are always flowers for those who want to see them.” – Henri Matisse

Lots of little Subjects to talk about today. Some Good, some Bad, some Ugly. So we will start with the Good.

As you know I follow the Farmer’s Almanac. Receive their emails and check out their site and everything. Today I received this article (dated Oct 11, but whose counting). It talks about Owls.

Check it out is you have a few minutes. It made me smile.

On the Fake Lamestream News Front

The Wall Street Journal has published internal material from anonymous sources at Facebook revealing that the company introduced tools that suppressed the traffic of Breitbart News by 20 percent, and other conservative publishers by double-digit margins.

If you would like to read the rest of the article, find it HERE

What it basically shows is that Facebook INTENTIONALLY reduced the reach of Conservative publishers that they disagreed with politically. If you remember the flap last month where the leftwing “whistleblower” sat in front of congress to let the public know that Facebook was doing the exact same thing last Fall (during the election cycle).

So it is not a “shock” to hear that this is happening. It IS A SHOCK to know that they are doing it openly and getting away with it. And by that I mean being allowed to curate information as they see fit without having the designation of “Publisher” and instead hiding behind the title “Platform.”

All of that may seem a little picayune, but it makes a difference. We use Facebook and other Social Media sites as a place to go to interact with people.  a “Platform” is simply the place we go to do it. They are not regulated in the same way as a publisher, who becomes responsible for the information they put out. As a platform, they should not care one iota what people are saying among each other.

When Facebook goes to the extraordinary level of “Controlling” how much and WHAT information you see – and creating preferences for news that they agree with over news that they disagree with, they cross over from Platform to Publisher. By doing so, they “control” what people are seeing and hearing about. They seek to inform the public based upon THEY’RE opinions about what is important and what is not.

For Example. During the George Floyd riots in the Summer of 2020, Breitbart published headlines that looked like this:

Facebook suppressed the Breitbart headlines and gave prominence to CNN. Now you tell me whether your opinion about what was happening as cities were burning all over the country would be influenced by Facebook pushing the headline “Mostly Peaceful Protests”  vs “Massive Looting, Buildings in Flames, Bonfires!”

Yesterday there was also another hard hitting breaking news story that has already made it to most publications’ page six or so. I found this header on Breitbart as well:

The Washington Post, the leftist legacy media outlet whose motto is “Democracy Dies in Darkness,” admitted to publishing fake news about the public’s discontent with floundering President Joe Biden.

This scratched the surface of the Story. A few weeks back, some ridiculous reporter (Kelli Savast who reports for NBC) was interviewing Brandon Brown, who had just won a NASCAR race. In the background, it could be obviously heard the crowd chanting “Fuck Joe Biden.” She cleverly tries to dodge the crowd saying, “They are chanting ‘Let’s go Brandon’.” And since then, pretty much everyone has lampooned the idiot for reporting something COMPLETELY FALSE.

EXCEPT – the Washington Post published a story claiming a crowd at a Trump Rally was chanting the infamous “Let’s Go Brandon” chant. Only thing was that the video clip OBVIOUSLY played #FJB, AND the rally the reporter was talking about was back in August (1 month before the famous Brandon Brown race.

WAPO had to retract the article. Something they never do. 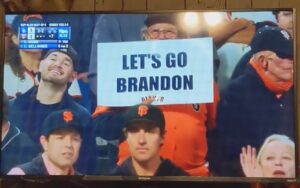 The Lamestream truly HATES this. People are Chanting Fuck Joe Biden all over the country. At Sporting events. Public events. Anywhere there is a camera. And when it’s not FJB, it’s “Let’s Go Brandon” as a way of saying the same thing and spitting in the eye of the media as well.

I was watching the Eagles football game against the Las Vegas Raider yesterday. The only memorable part of the game was near the end, the Raiders were kicking either a field goal or an extra point. The camera was positioned behind the kicker and into the uprights . And staring straight at the camera was a big sign with the happy phrase “Let’s Go Brandon” just like the picture here. Except this was not the game it was another game (notice the San Francisco Giants hats).

The phrase has become so iconic, that a rap star has created a song called “Fuck Joe Biden.” It is number one on iTunes. It was trending on Youtube, until they banned it. And not because of the swearing. But instead because there is a line it it that says that climate change is fake.

For pretty much all of the time I remember, Pravda (the official newspaper in Russia – formerly The Soviet Union) was synonymous with propaganda. Through and Through. It was the mouthpiece of whatever the Soviets wanted people to think and to know.

We welcome to America. You might argue that this level of propaganda has existed all along. And I would probably agree with you.  But it is examples like these that scream how bad it is now.

And Now for More Flowers