SUN – 03 LEO: A mature woman keeping up with the times having her hair bobbed

EARTH – 03 AQUARIUS: A deserter from the navy 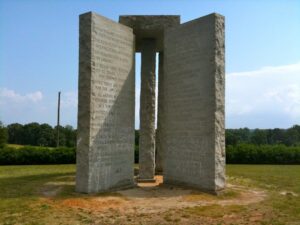 About 40 years ago, a strange monument found itself, seemingly out of nowhere, in a field in northeastern Georgia. I say seemingly because it was in a remote location. And now looking back at it, not a whole lot is known about how it came there. They know some guy who called himself R.C. Christian commissioned it from the Elberton Granite Finishing Company to build and erect the monument. They thought it was weird and offered a bid that far surpassed the cost. And it was accepted. The land was granted to the project from a local farmer. And the monument was put up.

From there, everything must speak for itself. Because the man gave a false name and has since beed pretty much untraceable. The organization he claims to have represented, “a small group of loyal Americans,” has not acknowledged itself.

It’s all in the Message

This is mostly taken from Wikipedia. A message consisting of a set of ten guidelines or principles is engraved on the Georgia Guidestones in eight different languages, one language on each face of the four large upright stones. Moving clockwise around the structure from due north, these languages are: English, Spanish, Swahili, Hindi, Hebrew, Arabic, Traditional Chinese, and Russian.

And on a sign posted next to the monument, this information is engraved:

Sponsors: A small group of Americans who seek the Age of Reason

So in a thousand years, when archeologists are trying to figure out all this same stuff we think it odd as hell, the physical features will be there in writing for them rather than having to spend months of research trying to measure themselves.

We have spent a good part of history trying to figure out what megalithic structures built in the distant past mean. There is Stonehenge, The Great Pyramids of Egypt, the Pyramids of Central America, Balbek, Kalisa Temple to name a few off the top of my head. What they all have in common in today’s history books is that we have no clear idea what they were built for and about the people who did it. Of how they were able to create these things given their “primative” technology.

Now we have the Georgia Guideposts. Only 40 years old and pretty much just as enigmatic. Because the message that is printed on the sides (in multiple languages) is directly out the the playbook of these people often described as the New World Order.

Now I have not done any kind of real studying on this. But a couple of good searches bring up so many questions that we can firmly put this structure into the Twilight Zone along with the others from the past.

Who is The New World Order? – That is the question of the day. The infamous “They” are a group of people who what to shape the future of the world. We are led to believe they have the means (money) to either make it happen or influence others to do it.

Google gave an interesting list of ten citations about the Illuminati and other “Conspiracy Theories”. Reading through them, the overarching these was to not pay attention to anything about this search because it is all bullshit and conspiracies.

DuckDuckGo was a little more enlightening. The first citation was an article entitled  Top Ten Illuminati Monuments and Landmarks. I have linked it for your reading pleasure because it is a fascinating article. And to the other point, of the top 10 Illuminati Landmarks, The Georgia Guidestones roll in at number 7! The other articles got to the root of what I was looking for. “New World Order buildings”

Now, what might be the agenda of the #1 top search engine in the world giving misleading responses to a straight forward search?

WTF is this 500,000,000 thing? – If a massive monolithic granite structure in the middle of a field in northern Georgia isn’t strange enough on its own, the first sentence should offer you a clue about the people who put it there. “Maintain humanity under 500,000,000 in perpetual balance with nature.” Given that there are presently about 7.67 Billion people on earth, and back in 1979 there were about 4.4 billion people, there is a SERIOUS disconnect with the Guidestones’ population figure. And Given that Bill Gates and a host of other billionaires have gathered to come up with solutions to the “population growth problem.” Well you can put it together yourself. (SPECIAL NOTE: A Google Search about “Bill Gates Population Control,” returned a bunch of sites claiming the Bill “Never Said That” links. The DuckDuckGo search link a whole bunch of articles (even from the NWO-Liberal Rag Huffington Post) quoting him talking about it.

And Then There ae “Today’s Dollars”

From the articles I read, the cost of the Georgia Guidestones was pretty astronomical. The Granite Company openly admitted they did not want to do it and offered a quote that was many times the value of the work. I am going to guess about $10,000,000. And if you factor in inflation for the past 40 years, that would mean that these people paid the equivalent of $37,400,000 to build this thing.

Now consider this number with the numbers that were thrown around last week in regard to the obscene amounts of money being thrown away by the Billionaires for a 10 minute ride into space.