– Planting Calendar (from the Farmer’s Almanac) –  June 30th– Cut hay or do plowing on this barren day.

10 CANCER: A large diamond in the first stages of the cutting process

10 CAPRICORN: an albatross feeding from the hand of a sailor

Funny thing about the Climate Change/Global Warming crowd. You never hear them talk about what they are going to do when the sky falls – or whatever the fuck they thought the world might do. Somehow, no matter how grim the color of the sky might be in their world, they do not really believe in the fear that is being spread. Because if they did, they would be PREPARING for the worst. Instead they are looking for big government control to somehow save them. I hope they have their FEMA camp reservations ready.

Now that we see the possibility of major Global Catastrophe, first thing I am thinking about is how will we survive. What’s it going to take? What might happen?

There are entire industries built around this concept. And there is definitely a market for products, items and services to hep prepare for the unknown.

Given the possibilities suggested by the video from Suspicious0bservers, I am going to begin a regular “prepping” series with advice on what to do when the Shit Hits the Fan (SHTF). As the Sabian Symbol for today suggests, this is a diamond in the rough. And I will be soliciting help from friends who have more relevant knowledge than I have. So Hang on to your seats – and dig a deep hole if you are so inclined. 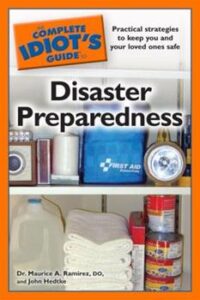 As I mentioned yesterday, should all of this go down tomorrow, we will not be prepared. And that is in a lot of ways. So I will be starting simple and going deep when necessary.

I might call this kind of a Complete Idiot’s Guide to Prepping. Unfortunately some Complete Idiot has probably already either already written it or have some kind of copyright on the name. And in fact, a quick search yielded the book pictured to the left. I think it is out of print because it is being offered by a used book store.

Books. I will start from the beginning on the subject with the RESEARCH phase. If you don’t know enough about a subject, you need to do research. This was something ingrained in me from a young age. My parents were both College Educated and believed in drilling information into us – both forcefully and stealthfully. My Mom’s education was as a teacher.

They bought the World Book Encyclopedias and and Childcraft Encyclopedias for us to have at home. We also got dragged to the library a lot. Which might explain how my brother ended up with a high school job as a page at the Whittier Public Library and I was the TA for the school library my senior year. 12 years of education and we were both qualified to shelve books.

But for Prepping, it might be impractical to carry around. So I will be offering a number of books that you might consider having around for when the SHTF. They will be your life’s reference guide and place to go for advice. Because when the SHTF, you probably will not be able to get cell service, charge your phone or do anything online . . . ever again.

I will create some sort of annotated list of these books for everyone someday (hopefully sooner than later due to the impending shit flying).

The Farmer’s Almanac has been around for centuries. It is an annual publication offering information relevant for farmers. Back in the day (call it the 1700’s-1800’s) before the Evening Lamestream News and weather report, people had only their wits and clues from nature to tell them about the world around them (oh and the local pubs too).

And while they did not have much in the way of technology, they had calendars, could count, some could read. They could track the procession of the seasons, the lunar phases, the tides, when the sun would rise and set. Here is where the Almanac came in handy.

Almanacs in America can be be traced back to the early 1700’s.

The first annual almanac printed in early America was “The Astronomical Diary and Almanac.” First published in 1725 in Boston by Nathanael Ames, it was the most famous of the early almanacs, along with “Poor Richard’s Almanac” by Benjamin Franklin. 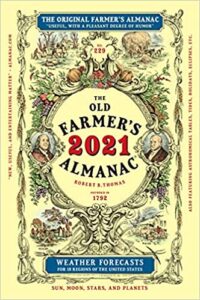 Yes, one of our founding fathers (probably names that because he travelled all over the world and likely left little Ben’s and Mary’s growing in his wake) was Ben Franklin. And before becoming a statesman, he was a printer in Philadelphia. And was best known for writing the Poor Richard’s Almanack, published between 1732 and 1758.  Poor Richard was Ben’s pseudonym and he dispensed advice and information in this popular pamphlet throughout the colonies.

There are many Almanac’s produced today. I have “The Old Farmer’s Almanac” by Robert B Thomas founded in 1972. They claim the heritage of Benjamin Franklin. Another publisher that I have had was the Harris Almanac. Both suffice for my purposes. Or for that matter any of them.

If you have one for 2021, then great. If not, you need to have it. They are not expensive (about $8). And they will offer you both hours of entertainment from the interesting articles as well as specific regional weather advice.

The Old Farmer’s Almanac of course also has a website www.almanac.com. I have always referenced www.farmersalmanac.com in my daily reports for the Best Days and Planting Calendars. But let’s face it. These won’t be worth much when . . . well you know it. So go out and buy the book. 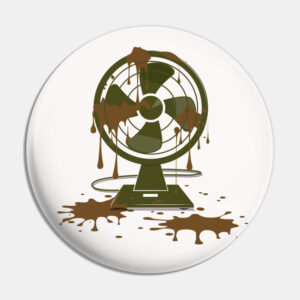