9 CANCER: A small naked girl bends over a pond trying to catch a fish

9 CAPRICORN: An angel carrying a harp

Yesterday I posted the video by Suspicious0bservers discussing Catastrophism and the end of all civilization. It presented scenarios that seriously questioned our ability to survive when the Shit Hits the Fan. And specifically how hard that shit is going to hit it.

When I started Astrogardens, it was to point out this kind of scenario. Should life get tough and society fall apart, what kind of things would be needed to survive? What does it take to put together a garden? How do you store food? Do you have access to clean and safe water? Can you survive without electricity? Do you think you need guns for protection?

I have covered bits and pieces of this throughout the last 3 years. But it is time to go deep.

If the Shit Hits the Fan this summer, I believe that I and my family are seriously fucked! I do not have water to last more than a day. Food for more than a week. The skills to create a fire without a match and newspaper. My garden will not bear fruit for at least another month.

I am not Prepared.

So I am inviting you along for the ride, if you are interested in being part of it.

But I am still going to continue to disclose information that the lamestream finds too inconvenient to talk about. So . . . 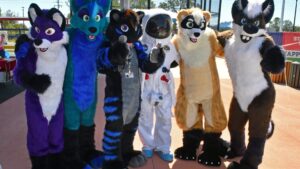 Yesterday as I started writing about catatrophism and Climate Change, I began by musing on the Sabian Symbol for yesterday, “A group of rabbits dressed in clothes and on parade.” I ended up deleting my comments because I had moved in a decidedly negative direction (not good for a Happy Monday).

My negative direction went while describing what my minds eye saw when I considered Furries. If you do not know about the Furry phenomenon, there is a lot to learn. I discovered them in an early episode of CSI (back when the only show was the Vegas version). And of course the CSI team was investigating the murder of a Furry at a Furry convention in Vegas.

Yes it is that big and yes it is that disturbing. Grown adults dressing up in animal costumes and gathering for conventions. As a special note here, when I googled “furries” to steal this “cute” picture, the first citation that came up was from WebMD entitled “Furry Sex: What is it?”

Well anyways, I took yesterday’s article another direction. But on further reflection, I may have been on to something with the Furries. Because I recall back into my childhood (during the deep dark 70’s).

I was an early riser. I would wake up at the crack of dawn and turn on the TV. And after they played the Star Spangled Banner and read off The Farm Report, kids programming would start. This included staples like Sesame Street, The Electric Company, Mr Rogers and That’s Cat. I remember one of the shows that would come on was called The New Zoo Revue. It was this God-awful thing that would be copied a decade or so later and called Barney the Purple Dinosaur. But the New Zoo was exactly the same, with life-sized Furries as characters.

Now why do I recall this disturbing show? Well it was due to a specific episode. They had decided that pollution had become so bad that they would have to outlaw ALL POWER. They would all have to survive without it.

Then the drama began. One of the character’s decided that they would find a new source of illegal power. They enslaved their pet The Dorse (which was a freaky cross between a Dog and A Horse – played b y a human in a weird Furry costume). They harnessed him to a treadmill which produced illegal power for them.

What was the moral of the story? Who cares. It does not matter.

What does matter is the fact that they have been using sleazy mind control techniques in the media for as long as I have been alive. And that means it’s been a hell of a lot longer. This time it was teaching about Conservation and Environmental controls by the government. But what do you think they were teaching through The Boy Scouts? Seems a little like The Hitler Youth of Nazi Germany. Do you wonder how deep power structures will go to in order to indoctrinate the youth of the world?

I have kids (10 in fact). And I have been watching it go on with them for over 25 years. And at some point I will also have grandkids. Will they all be government-trained citizens of the republic? How much reeducation is needed to get them ready for the Real World?