EARTH: 29 SCORPIO: An Indian woman pleading to chief for the lives of her children 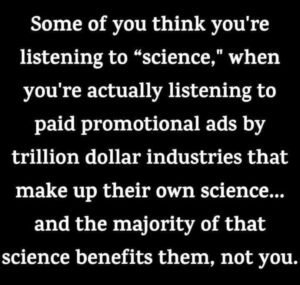 I saw this meme on Facebook and it got me thinking. Especially in the past year I have questioned information that is being presented as “science” more and more. And for exactly this reason.

I am naturally a pretty cynical person. But the last few years, many would classify me as full on Conspiracy Theorist. And I am cool with that.

Because looking at the last year an a half with all the conflicting and downright lies we have seen from the Pharmaceuticals industry and its apologists in the Medical and governmental establishments, you have to be a complete zombie to believe it.

It reminds me of a couple short stories.

Have you ever tasted something in a restaurant and thought that you would like the recipe to make that particular dish. An enterprising individual might as the restaurant for the recipe so that they might be able to make it as well. Or you might google it. Now the question is, Have you ever actually tried this?

Let me relate a similar excursion I have been on for a number of years. My wife and I are known for baking Christmas Cookies. And the favorite at our house is . . . Tollhouse Chocolate Chip Cookies. To me it seems like the most basic of all cookies (because it is). We follow the recipe on the back of the Nestle Chocolate Chip bag (WITHOUT THE NUTS OF COURSE – who does that?).

And wouldn’t you know it. Every single year, one of our older kids will call asking for our recipe and then claiming that their cookies did not turn out the same. What is the secret? Is it the oven? The way we mix it? Refrigerating the dough? The pans we use? Who knows what they do differently.

I often wonder about this because of the memories I have of my own grandmother’s Chocolate Chip Cookies. I have queried members of my extended family to figure out what she did. The only answer they offer is that Grandma used Crisco (we use butter).

Some people say that the untold element is love.

What the Half Blood Prince Has to Say About It

One of my favorite side stories in the Harry Potter series in the Half Blood Prince.  At the beginning of the year, Harry did not take Potions, as Professor Snape would not accept students at that level who did not receive an “O” on their Owl exam. When he discovers that Professor Slughorn will take him, he joins the class. Since he does not have a book, he is directed to take one from the class shelf.

They are then set to the task of creating a “tricky” potion called “Living Death.” The prize for someone who could brew an acceptable potion was to win a bottle of Liquid Luck – another “tricky” potion that will give you 1 day of excellent luck. Professor Slughorn Then notes that only one student has ever been able to brew a potion of sufficient quality to claim the prize.

As they start, Harry notices that his used book has been written all over by its previous owner. And in the margins and throughout the book there are notations about different things to do. And here is where Harry begins to shine. The notations in the book point out things that should be done different in order to make the potion work.

In the course of the the next hour, you can see that the other students are having particular problems making the potion work. Smoking, smelling, exploding, thickening. While Harry, following the special notes, is brewing it perfectly. And of course he then wins the prize (which is a whole different story).

But the point I am making by offering this vignette is that it brings up A LOT of questions – the only one of which is covered in the book is about how using this book is somehow cheating. (I always thought that was stupid. When I was in college I always bought used books – they were cheaper. But I never got anything valuable from the experience.)

I believe in the wizarding world there were many many secrets between wizards. Some of them may have been advantages one may have over another (consider the status of wizards who were animagi and could change themselves into other animals – and that they had to register this ability – and that there were 4 rather pivotal characters who had the ability and had failed to register it with the Ministry). It shows that the Wizarding world, no matter how cool and interesting it was, was filled with ethically questionable people.

So Back to the Recipe

These couple examples suggest that there may be some pretty wide spread secrecy and fraud going on in regard to secret recipes. Consider:

A lot of unanswered questions . . . that lead to a whole lot more. And how many of them are hidden behind a wall with the word

happily placed upon it to pacify anyone who might want to ask quesions?