SUN: 16 TAURUS: An old teacher fails to interest his pupils in traditional knowledge

EARTH: 16 SCORPIO: a girl’s face breaking into a smile

When things come at me in threes, I try to take extra notice. Is it the media’s obsession of celebrity deaths that come in 3’s? Is it something else?

In this case, it is an esoteric subject that has pulled itself into my existence over the past couple weeks. And that subject is sound and Harmonics.

And you say, WTF are you talking about Andrew? Let’s take a step back and listen for a few minutes while I get into the subject and tell a little back story.

I have always felt an affinity to music. Naturally who wouldn’t. It’s everywhere. On the radio, piped in to most businesses and buildings, elevators, restaurants, in the background on television. I do not think that it means that I am special that there is always a song going on in the background of my mind (this morning it is a song I do not know the name of by Pearl Jam).

That being said, I believe that there are times when songs are drawn into my consciousness that have a message. It presents itself. I either hear it or I feel it. And when it happens, I generally know. And must then try to figure out why.

All that being said, back to the subject of Harmonics.

Given my already positive predisposition towards believing that there are special messages in sound and vibration, this very subject has presented itself to me in the past few weeks (since the New Moon).

So, what were these messages?

I have been encouraging people to watch this movie FOR FREE for the last week. They have extended the free watch period for another week. And I highly recommend it. You can see it at www.thriveon.com. 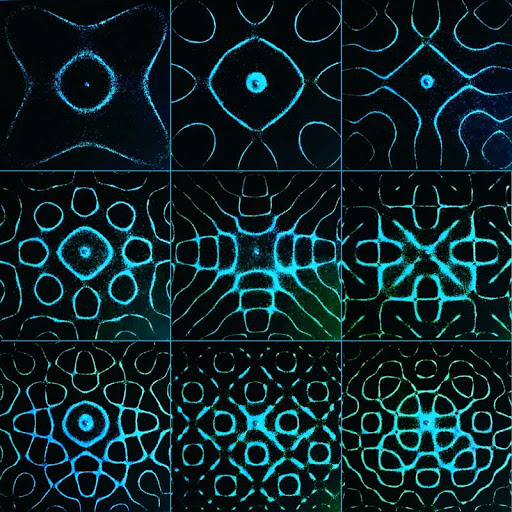 You do not have to get too deep into it before frequencies and resonance are presented (Its the first subject they delve into). They open the discussion about the Unified Field. This may be a topic I am completely unqualified to talk about. It is what old science used to refer to as “the ether” and New science stopped talking about when they identified atoms and molecules. It is the connective force keeping things together.

“Sound waves at different frequencies are what shape energy into matter.” -Kimberly Gamble

They showed examples of Cymatics. This is the study of sound waves and how different frequencies react. The experiment used a vibration plate with sand on it. The frequency was played and you could see the difference in how the sand reacted to the vibration. Different frequencies produced different variations in the sand.

On Monday, I offered a quote from Dr. Masuro Emoto. He is known for his studies on sound, intentions and their effects on water. He showed similar experiments with frozen water crystals.

Thrive II seeks to inform people about these studies and how they have the potential to transform the way we interact with sound frequencies. After informing, its second premise is to question why these technologies are not being conducted or followed in the mainstream. And suggest reasons why mainstream science and power structures and not doing more with it.

Do not laugh. Ancient Aliens is one of my favorite shows. Is this because I am convinced that Extra Terrestrials are here and have been for millions of year (as ancient astronaut theorists agree)? Not necessarily. I enjoy the shows because they dare to question Big Science about things that can be openly questionable that they cannot explain. Like:

You get the idea. But last weekend, I was passively watching (Thanks to the History Channel for showing multiple episodes in a row almost every weekend), and this episode was being shown. The episode was only about a month and a half old, but it came into my world at the right time. It is described:

Archaeologists have discovered that many ancient sites were built with an acoustic purpose, and often resonate at a frequency that has a profound effect on the human brain. Could ancient people have been aware of a harmonic code? One that put them in contact with alien beings?

Big science does not like what they cannot control or explain. Is this due to their sheer arrogance? Or are they hiding things that we may not be “ready” to find out about?

As part f the episode, they also discuss the same Cymatics experiments as discussed in Thrive II.

But the importance goes even further. They delve into archeology and examples of how these the practice and use of sound frequencies and vibrations were part of our ancient past. And that it was technology being used and has either been lost by or hidden from society.

Sol Luckman has been one of my favorite authors since introducing Snooze to the world about 6-7 years ago (I apologize that I do not remember exactly when that was). Snooze delved into the Bermuda Triangle, Big Foot and alternate realities.

In addition to writing wildly entertaining Sci-Fi dystopian YA fiction, Sol and his partner Leigh have done extensive work in the field of sound and vibration. Specifically that there are frequencies that can profoundly affect our bodies.

And it is here that one of the primary story lines of his latest Novel, Cali the Destroyer, approaches. To say that Sol’s books only address one rabbit hole would be a laugh. There are many in this novel. But frequency and vibration are one of the keys. And if Vaccinations, a scary dystopian future, gnosticism and the archons are not enough to pique your interest, then consider how secret and hidden technologies might affect the reality he builds.

Cali is available for preorder now at http://www.crowrising.com/cali-the-destroyer

The Power of the Three

My point from the beginning of this was that since the beginning of this new astrological year, the subject of frequency and vibration have been entering my consciousness at a noticeable rate. As we look toward a future of a second renaissance unfolds, these are the types of information that I believe we can expect to see.

There will be a removing of the veils of secrecy around technologies that have been here since the beginning of history. Are we rediscovering them? Are we simply disclosing what has been here all along? And will the people or entities that have been keeping the secrets quietly allow the disclosure to happen?

Will they be the “Woman in pastel colors carrying a heavy and valuable but veiled load?”

Will we be “the chanticleer’s whose voice heralds the rising sun with exuberant tones?”