WWIII, Robinhood and the 2021 Battle of Wall Street

Remember this date. Remember it well. It marks the beginning of one of the battles in the undeclared war that has been going on for the past few years. And it truly is a World War. It is being fought on multiple fronts all over the world. It is an undeclared war, and its players are working behind the curtains. And if my guess is right, there are factions operating even within single countries or governments.
But do you wonder why you have not heard about it through the Lamestream News? Why is it not on the tip of everyone’s tongue. Is there a body count? Machines of War? Hatred of one side vs another? 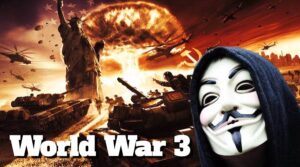 For people who do not follow financial markets, the ups and downs and machinations of the markets are pretty much ignored. You hear headlines like “The DOW is up 50 points.” Or “NASDAQ is up 10%.” Or There was a run on long term bonds. If they say its “up” people feel good. If they say its down, people feel negative.
Or any number of things like that. But if you do not have investments or read the Wall Street Journal, you do not pay a whole lot of attention.
Financial Markets can no longer be said to exist in a single location. There are Stock Exchanges all over the world in many major cities. But to be honest, with an online world there is little or no need for the actual locations – Tokyo, Honk Kong, Shanghai, , London, New York, Chicago – there is about 25 of them spread out across the different time zones.
Despite the locations, most of the trading goes on in cyberspace – online trading by brokers and individuals all over the world.
If you have been paying close attention to this story, you likely know a hell of a lot more about it than I do. Because I have honestly only been following the headlines. BUT FRANKLY – the headlines seem to be telling a HUGE story that the lamestream is just ignoring or covering up. So let me sum up.
1) Reddit group declares war on large fund managers and their practice of Shorting underperforming stocks. When the Fund Managers short Gamestop (causing the price to go down), members of the Reddit group go all in buying up the stock causing a run on the stock and the price goes through the roof. (I would call this something like the Movie Wallstreet and they pulled a “Blue Horseshoe Loves Gamestop”)
2) Gamestop stock goes artificially wild. Big Fund managers lose Billions of dollars. A bunch of kids make thousands in the process. AND they embarrass Wall Street. 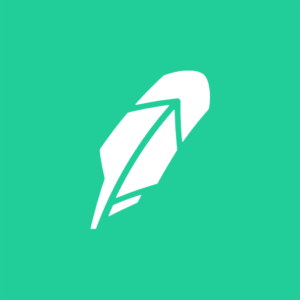 3) BIG MONEY and BIG TECH attack back and shut down the App Robinhood – effectively shutting down the rogue guerrilla attack. Many of the Reddit Group members were using the Robinhood App to make their purchases.
4) BIG MEDIA joins the fight with the hit-piece story of the poor 20 year old boy who was allowed to trade options on Robinhood. Received a series of emails claiming he lost over $700,000. Tried to resolve, but Robinhood had no live customer service. Pimply 20 year old kills himself. Next day Robinhood emails him say it was all a mistake. Story broadcast all day Monday on EVERY News station. I heard the ladies on The Talk discussing it – and giving first hand accounts of using Robinhood and how they felt it was aggressive and untrustworthy.
5) BIG TECH make further moves to control or deplatform other Apps that might offer advantages
6) BIG GOVERNMENT gets involved, calling Financial types and Big Tech to come and testify in front of the Democrats in charge to figure out how all of them can “control” things better.
During the course of the run of the Gamestop stock, it began at about $6 (having been driven down by the large fund managers from about $20). It shot up into the 300’s. It settled between 50 and 80. And it is still wildly fluctuating. Thursday February 26 it rallied to about 180 before calming back down closer to 100. March 8 it pushed over 200 again. All for a stock that was pushed to the brink under 5 a month ago.
What everyone understands about this run is that is has nothing to do with the company Gamestop itself. They were being mismanaged and the business model was failing – a one year pandemic where gamers could not go buy stuff at stores nor had the money to do so was also part of that. When the financial markets decided to “cancel” Gamestop, the Reddit group  found a loophole and attacked. Was it the angst of a whole bunch of dorky unshowered  gamers fighting for their favorite store location to buy new games or Pokemon cards?
I think not. There is much more to it that that. The reaction of Big Finance was way too heavy handed for just a small battle. This is not a skirmish on the battlefield of WWIII. This is a campaign. And its a whole new battlefield with completely different weapons than we have ever seen. 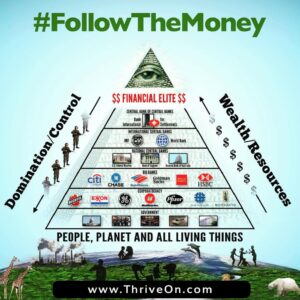 Who are Some of the Players in This Global Kerfuffle?

I came across this version of the global power pyramid watching the movie Thrive. And for anyone who hasn’t seen it, its free so go watch it. It came out in 2012 or so and is still one of the best red pill movies out there.
And the red pill moment is when they point out where the global power structures really are. As you can imagine, all of us little guys are on the bottom – holding up the people above us.
In our little worlds, we might think that it is the Government that is on the top. We vote for them. We put them in power. They work for us . . . WRONG!
It is not the US vs China vs Russia. Governments are much smaller players than they may appear.
The people pulling the strings keep themselves firmly in the background. They have amassed fortunes that most cannot fathom. And they are in the background fighting with each other. Money controls everything. And control of the money making ventures. Energy. Pharmaceuticals. Credit.  And even these industries are having their strings pulled.
Its doubtful any of us know whose side we are really on when you hear about world events. Are we the good guys? The bad guys? Uninvolved?

So What Happen’s When David Hit’s Goliath Across the Forehead?

The message (or shot across the bow) that was sent to the financial markets is multifaceted. 1) People are wise to their market practices, 2) They have learned from Sun Tsu and know that war is fought with a single battle or on a single front.
This is more that two men on a battlefield. And the battle will be decided by a hell of a lot more than a single rock.
2021-03-08
Previous Post: Happy Monday! March 8, 2021
Next Post: Tuesday March 9, 2021