EARTH: 25 SAGITTARIUS – A chubby boy on a hobbyhorse

Happy Monday! All the windows of my heart I open to the day. – John Greenleaf Whittier

I grew up in the City of Whittier in California. I describe it as a small town in the middle of Los Angeles. It sits on the far eastern end of Los Angeles County – bordering Orange County (You know, the OC).

I call it a small town because it always remained pretty much untouched by LA. We were insulated – nestled up against the hills. The Freeways went around Whittier rather than through it. So we were insulated. To the South and West, we had the Oil fields and the warehouses of Santa fe Springs. To the North, the hills. To The west was Orange County, but that was the northern end of that, and how many people have really ever heard of Brea, La Mirada or La Habra? No offense to anyone living there, but lest face it, we were all insulated together.

This morning I found this article on Facebook, shared in the People of Whittier page I connected with. It says a lot about the things going on around us in this Riot-woke time post Pandemic.

By now many people likely have seen that overnight in Central Park, the statue of John Greenleaf Whittier (sculpted by artist Christoph Rittershausen for the town’s centennial and paid for by residents; see https://www.latimes.com/…/la-xpm-1987-02-12-hl-2792-story.h…) was vandalized. I won’t share the photos here, but I will say this: I’m no criminologist, but the choice of colors (pink, neon green, blue), plus some other evidence (“boobies” painted out JGW’s chest, his fingernails “painted,” etc.) seem to me to indicate this is the “work” of (young) provocateurs, not civil rights protesters.

Another bit of evidence which seems to me to point to the inexpert work of mischief-makers rather than another group was the graffiti: “[expletive] slave owners.” Now it could be that the folks who undertook this vandalism (deftly removed by dedicated City employees and volunteers this morning) don’t know the score, or maybe they do and, again, were just trying to stir the pot. But lest they don’t know—and in case *you* don’t know—here’s a brief lesson: 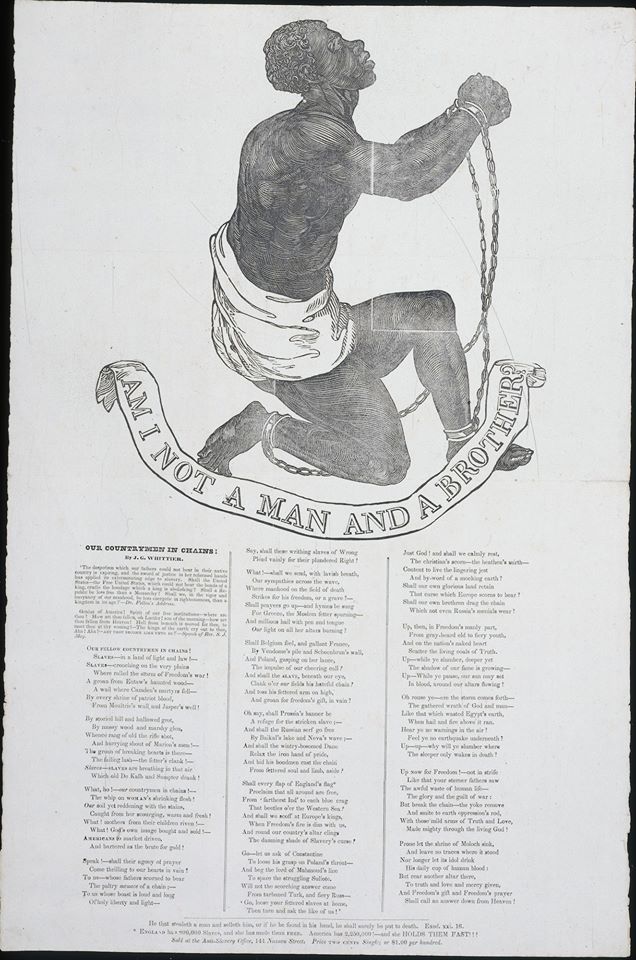 This town was named after John Greenleaf Whittier (1807-1892). You might recognize that middle name as an important avenue in the Uptown area. The reasons the founders of the town picked “Whittier” was because they were Quakers, and Whittier was arguably the most famous poet in America at the time. Like our town’s founders, he also happened to be a Quaker—the Christian sect associated with pacifism in the twentieth cenntury, but most closely associated in the nineteenth century with the abolition of slavery. Whittier has a huge body of writing, but a significant portion of it is pamphlets, essays, speeches, and poems dedicated to the abolition of slavery, and to showing how and why slavery’s defenders’ arguments about white supremacy and Black inferiority were complete bunk.

One of his most famous poems, “Our Countrymen in Chains,” was published in the 1830s, and immediately slapped on a broaside with a more famous image: that of an African American slave in bondage, asking the rhetorical question that obviously we are still grappling with today as we think about our civic commitments to justice and equality: Am I Not a Man and a Brother?

For a closer look at the broadside (i.e., one in which you can actually read the text of Whitier’s poem), check out this digital version at the Library of Congress: https://www.loc.gov/item/2008661312/. And if you want to know more about JGW’s abolitionist activities, see https://en.wikipedia.org/wiki/John_Greenleaf_Whittier….

(Don’t worry, folks—I’ve been an academic librarian for 15+ years, and I promise it’s okay to use Wikipeida as a tertiary source, especially if you’re looking to the footnotes to lead you to more authoritative ones.)

It got my attention this morning as I was listening to the morning News on CBS. The lead story was about the Statue of Christopher Columbus in Marconi Park in Philadelphia. The story was about how there is a barrier constructed around it. Police have been guarding all night. There was a crown of people milling about all night. There was a group of people, some with Assault Rifles.

Some of the people were there as part of a group to destroy the statue. Some were there to protect it. How many of whom was unclear. But its obvious that there is a strange level of pent up anger looking for an innocent victim to throw it against.

From my perspective, I have a serious problem with mob rule. Especially when it comes to mobs destroying thing. Destruction has been a big thing with this latest event. And as the Whittier story points out, little of it has to do with the George Floyd murder.

It is misplaced anger. More of The Purge that has yet to be quenched. Do we allow these petulant 5 year olds to continue flushing that toilet over and over again until it floods? Or do we take them aside and slap them on the butt and tell them to stop?

My Happy Monday message was inspired by the John Greenleaf Whittier story. We need to open those windows and add some more of our hearts to this time.

I leave it today with a piece musical of wisdom along the same lines.