– Best Days (from the Farmer’s Almanac) – Cut Hair to Slow Growth, Mow to Slow Growth,  Slaughter BEST DAYS BUT NOT RECOMMENDED DUE TO SOCIAL DISTANCING (Entertain Friends, Host a Party)

The Full Moon is one of the most well know astronomical and astrological events. 1) It happens once a month (just about). 2) It is visually striking (Besides the Sun it is the largest thing we can see in the sky – and it lights up the night), and 3) It is well known to cause weird things to happen.

So for this first Full Moon of the lunar year, I wanted to talk about it for a bit. Maybe set this as one of those pages you go to when you want to find out data about the moon.

Full moons are a lunar phase which occur roughly once every month when the Earth is located directly between the sun and the moon. At these moments, the side of the moon that faces towards us is fully illuminated.

So for the Aries Lunar Phase in the Gregorian year 2020, This is the first Full Moon of the Spring. And it is referred to as The Pink Moon. In North America, it a name of ancient origin that is likely derived from the the pink flowers of the Wild Ground Phlox plant which often bloom around this time of year.  It has also been called the Paschal Moon, the Sprouting Grass Moon, The Hare Moon, The Egg Moon and the Fish Moon. I guess it depends on where you are.

For Astrology, We look at the Full Moon as the Completion or fullest expression of the energy that began with the New Moon. In our case in 2020, that was described with the Sabian Symbol at 5 Aries – A Triangle with Wings.

From the New Moon to Full, the energy is building (or Waxing). From the Full Moon, back to new, it is receding (or Waning). So the Triangle symbol suggests mysteries and the ethereal realm. Have you been feeling this energy. Things going on outside reality. Also consider your own intentions. Did you set intentions for the year? For the month? This is a time they have taken off and are on their way.

“Supermoon” is a term which refers to any full moon that occurs when our Moon is within 10 percent of its perigee, or minimum distance from Earth. This year, The Full Moon in Aries happens within hours of the Lunar Perigee, as noted in the aspects at the beginning of this post. The Full Moon will occur at 10:35 p.m. Eastern Time, when the moon will be located 221,851 miles from our planet (as measured between the centers of the moon and Earth) according to EarthSky.

The lunar perigee will occur at 6:08 p.m. on the same day. At this point, the center of our natural satellite will be 221,773 miles from Earth’s center. The April full moon falls closer in time to a lunar perigee than any other full moon in 2020.

And what is the difference between a Supermoon and a non Supermoon? It is about 10% bigger. It is bright and fun to watch.

We know its bigger and brighter. But the mainstay of Full Moon lore is that it is known to cause strange things to happen. 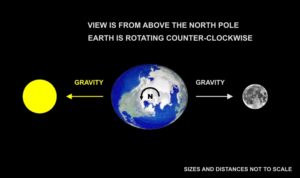 If you wish to deny this, you might spend some time with an Emergency Room nurse, a teacher or anyone involved in the mental health industries.What is it like when the Moon is Full? The ER is crowded, the kids are unruly, and the freaks are freakier. Ask a Cop. What are the jails like.

The Earth actually feels the constant pull of the gravity of the moon throughout the day. This can bee seen in the tides. As any point on Earth faces the Moon, it pulls toward it. The force is so strong, that it causes the tides. Is this a pull on the water? Is this a warping of the planet itself? Whatever it is, it affects us.

At the Full Moon, there is the strongest influence of the two greatest gravitational forces that exist. The Sun and the Moon. If you have paid attention, the greatest variations in Tides (highest flooding tides) are seen during the Full Moon Phase. The graphic above illustrates this.

Those same gravitational/magnetic forces are also acting upon each of us. Some of us are more sensitive to it than others. Are people actually more careless at the Full Moon – as they fall and get into accidents and end up in the ER more often? Do people who have mental disorders more sensitive because they can feel the pull, and it pulls them out of balance? Do we get Full Moon Fever?

All of these are questions that need answers. And the answers are not going to be found by asking a Doctor or a Scientist.