– Best Days (from the Farmer’s Almanac) – Cut Firewood, Mow to Increase Growth, Dig Holes, Paint, Kill Plant Pests, THINGS YOU SHOULD NOT DO BECAUSE OF SOCIAL DISTANCING (but are good nonetheless) – Get Married, Entertain Friends, Host a Party, Travel for Pleasure,

When Venus and the Pleiades Dance

This weekend we are blessed to see a relatively rare conjunction in the sky. This is when Venus will be conjunct the Pleiades. It is relatively rare because it only happens every about 8 years.

In addition to being between the Sun and the Earth, Venus also rotates on a different Plane from Earth. While Earth travels around the sun every 365 .256 days, Venus takes 224.7 Earth days (since that is how we recon time). Every 18 months, Venus laps us, causing a Retrograde.

I would liken this conjunction kind of like the instance of solar and lunar eclipses. It happens around the same dates early April and visible in the same spot in the sky – in the constellation of Taurus. So like eclipses, it happens at predictable times, though not all that often. 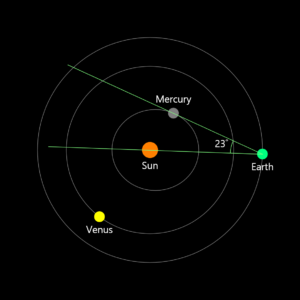 The inner planets of our solar system will always be visible to us close to the sun. As shown in this picture, viewing Mercury will be within about 24 degrees of the Sun and Venus about 45 degrees. For practical purposes, this must be done either at Dawn or Dusk – before or after the Sun rises or sets when the sky is dark enough to see them.

An easy way of sighting this is by extending your arm toward the sun with your hand out, palm facing out. The measurement between your thumb and little finger is about 25 degrees. So Venus will never be more than about two hands away from the sun and Mercury, less than one hand.

The Pleiades are known as the seven sisters. The Constellation is named for the Greek myth of the same name. The names of the sisters are Alcyone, Atlas, Electra, Maia, Merope, Taygeta, Pleione, Celaeno and Asterope. Visibly, these are the stars you can see unaided. There are actually over a hundred stars that make up the cluster, adding to its brightness.

Its brightness and uniqueness has earned it attention in star lore throughout the world. It is known as Matariki to the New Zealand Māori. Its helical rising in May/June traditionally starts the Māori new year. In Japan, the Pleiades are are known as Subaru. The car manufacturer Subaru uses a stylized depiction of the star cluster in their logo.

Astrologically, the conjunction of Venus and the Pleiades combines the troubled aspects of the Pleiades (Accidents, blindness, violence, feminine power. Ambition, honor and glory. Trouble with opposite sex. Bereavement; loss; sorrow.) with Venus. And Venus governs courtship and adoration, as well as personal taste and esthetics. Venus represents your values, including your relationship with finances and material possessions.

This is a strong conjunction that those who aspect it in their charts should be aware.

Star Lore of the Pleiades: The quotations below are from The Fixed Stars and Constellations in Astrology, Vivian E. Robson, 1923. This book is a useful summary of two thousand years of lore concerning the ‘fixed stars’. Much of what is quoted below probably finds its origins in Ptolemy’s Tetrabiblos.

The Pleiades or Atlantides were the seven daughters of Atlas and Pleione, six of whom are described as visible and one as invisible or “lost”. They were the virgin companions of Artemis [Diana] and were translated into heaven in order to escape the importunities of Orion, or according to another account because of their grief at the fate of their father Atlas, who was condemned to support the weight of the heavens on his head and on his hands.

The names of the sisters… are as follows: Alcyone, Maia, Electra, Merope, Taygete, Celaeno and Sterope, and to these have been added the parents Atlas and Pleione

The missing or lost Pleiad has been said to be Merope, who alone married a mortal, Sisyphus, and hid her head in shame at being the only one not married to a God, but other accounts substitute either Electra, who withdrew her light in sorrow at the destruction of Ilium [Troy], which was founded by her younger son Dardanos; or Calaeno, which Theon the Younger said was struck by lightening. [Curiously, however, there are now seven again as the above photo shows.]

The Pleiades form a cluster with Alcyone as the principal star, situated on the shoulder of the Bull. For all practical purposes the longitude of Alcyone may be used for the whole group, as all are contained within about one degree of longitude.

Influence:  According to Ptolemy they are of the nature of the Moon and Mars; and, to Alvidas, of Mars, Moon and Sun in opposition. They are said to make their natives wanton, ambitious, turbulent, optimistic and peaceful; to give many journeys and voyages, success in agriculture and through active intelligence; and to cause blindness, disgrace and a violent death. Their influence is distinctly evil and there is no astrological warrant for the oft-quoted passage Job (xxxviii. 31)” Canst thou bind the sweet influences of Pleiades? “which is probably a mistranslation.*

*[The complete passage reads – King James Bible Job 38 31 – “Canst thou bind the sweet influences of Pleiades, or loose the bands of Orion?” Vivian Robson was correct about the translation in the King James version. In the more modern New American Bible this passage is given as “Have you fitted a curb to the Pleiades, or loosened the bonds of Orion?” I have read that Jehovah’s Witnesses once believed that the Pleiades, specifically Alcyone, was the place of the eternal throne of God, on the basis of that passage, but this may be apocryphal.]

If rising: Blindness, ophthalmia injuries to the eyes and face, disgrace, wounds, stabs (operations nowadays), exile, imprisonment, sickness, violent fevers, quarrels, violent lust, military preferment. If at the same time the Sun is in opposition either to the Ascendant or to Mars, violent death.

If culminating: Disgrace, ruin, violent death. If with the luminaries it makes its natives military captains, commanders, colonels of horse and emperors.

With Sun: Throat ailments, chronic catarrh, blindness, bad eyes, injuries to the face, sickness, disgrace, evil disposition, murderer or murdered, imprisonment, death by pestilence, blows, stabs, shooting, beheading or shipwreck. If in 7th house, blindness, especially if Saturn or Mars be with Regulus. If with Mars and Venus the native will be a potent king obeyed by many people but subject to many infirmities.

With Moon: Injuries to the face, sickness, misfortune, wounds, stabs, disgrace, imprisonment, blindness, defective sight especially if in the Ascendant or one of the other angles, may be cross-eyed, Color-blind or the eyes may be affected by some growth. If in the 7th house, total blindness especially if Saturn or Mars be with Regulus and the Moon be combust.

With Mercury: Many disappointments, loss of possessions, much loss from legal affairs, business failure, trouble through children.

With Mars: Many accidents to the head, loss and suffering through fires. If at the same time Saturn is with Regulus, violent death in a tumult.

With Saturn: Cautious, much sickness, tumorous ailments, chronic sickness to family many loses.

With Uranus: Active mind, deformity from birth or through accident in childhood, many accidents and troubles, many unexpected losses often through fire or enemies, marriage partner proves false especially if female, troubles through women, occult interests, unfavorable for children, if any, and lack of harmony with them, heavy losses at end of life, violent death. [Uranus was discovered in 1781.]

With Neptune: Bold, military preferment, honor, wealth, help from friends, many serious accidents, many travel, somewhat dishonorable occupation involving secrecy, ill-health to marriage partner and peculiar conditions respecting parentage, bad for children, may lose everything at end of life, violent death, often abroad while following occupation. [I am not sure from where Vivian Robson takes this information as Neptune was only discovered 76 years before her book in 1847.]

With Pluto: [There is no information for this planet. Vivian Robson wrote her text in 1923. The planet Pluto was discovered on 18 Feb 1930 and not named until May 1930.]