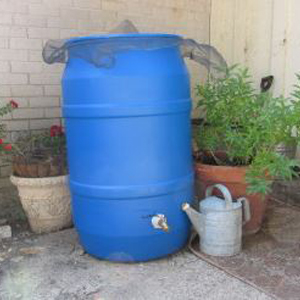 Last week we received about 4 inches of rain. We were stuck in an east coast weather pattern that brought tons of moisture up the coast from the Gulf of Mexico. And while our little town is about 20 miles from the real deluge and flooding, we got our fair share of rain.

Seeing all this precipitation (and thinking about my water bill) I would love to be able to save some water for some of our less rainy days and weeks. Not only would it be good for me and my yard, it also helps in the whole self sufficiency thing. You ask, what happens during the zombie apocalypse when there is no electricity to run the pumps – meaning no public water system. Our closest water source is just 5 blocks away. But Wyomissing Creek is not big enough to supply the whole Borough.

Of course, storing and using rainwater brings up a whole slew of issues. And none of them cause anything but anger and irritation to me. And most of my irritation is over the potential of my own community finding one or more reasons why they will say I can’t do it.

For me, there would be 2 main reasons for storing rain water. 1) First, my downspouts have issues anyways. I need to do work on them (mostly cleaning) and this would be a great time to include barrels with the upgrade. 2) Second would be to help with watering my garden. With all the rain, I have not had to turn the hose on in the past 2

weeks. But when its not raining, I am watering a lot. The idea of being able to save what is coming down naturally – and having it closer to the garden than my present hose, is appealing.

In looking into these, I have found that they are not too expensive – ranging from between $100-$400, depending on the style and size. On the one hand, cheaper always works. But at the same time, I think the wooden barrels look really stylish.

I will need to get at least 2 of these barrels – for the East and West corners of the house.  They will be in the front – as these are the spouts giving me the most problems.

But What about the Neighbors?

This is the part I am most concerned about On the one hand, I have one neighbor who I know is going to give me a hassle. He gives me shit about everything I do, so I have grown to expect it. He will be the one to glare at me when I am installing it. Then go to the Borough (where he is a council member) to determine whether I have broken any rules and regulations. I know he has already gone to them with other issues. And for my water downspouts, he has been able to do nothing. He tried to get me sited for not pealing paint around these same spouts about a year ago.  But even the fact that it sometimes runs over into his yard has not given his grounds for a formal complaint. It would be just my luck that he will find some reason to get me in trouble after I have paid for the barrels.

If my problems do not go further than an irritating neighbor, I will be blessed. Because there have been so many others who have tried collecting their rainwater where the issues have become serious.  As written on Accuweather.com a couple years ago:

Is collecting rainwater legal in your state?

Some U.S. states have laws restricting collection of rainwater, making it difficult for the average homeowner to set up a rainwater harvesting system.

Strict regulations and restrictions have been put in place over the last century. Currently, nine states have laws restricting the collection of rainwater, but the severity of those laws differ.

The issue of illegally harvesting rainwater went viral in 2012 when a 64-year-old man, Gary Harrington, was sentenced to 30 days in jail in Oregon.

In the western U.S., any use of rainwater is subject to legal restriction of some sort. In the 1860s, miners in Colorado experienced water shortages and developed a system to divide water based on a priority system.

This system developed into the prior appropriation system, which is basically calling dibs on water.

“Stream flow is supplied by precipitation in the form of rain and snow, so if the supply is taken away, stream flow will decrease,” Jeff Deatherage, water supply chief in Colorado, said.

However, this issue has nothing to do with the environment. In fact, a number of independent studies proved that letting people collect rainwater on their property actually reduces demand from water facilities and improves conservation efforts.